Instead of just writing something in regard to the jazz chanteuse’s birth centenary this week (April 7), I’d thought I’ll illustrate it instead. Happy birthday, Lady Day. 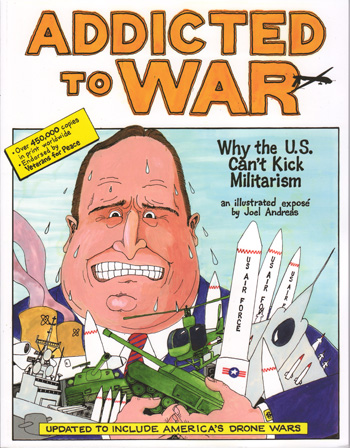 “I look forward to the day when the schools automatically receive the funds they need and the Pentagon holds bake sales to buy tanks.”

For a quiet little phenomenon, Joel Andreas’ Addicted to War: Why the U.S. Can’t Kick Militarism gets its third revision since its 1991 debut as a protest and explanation of Pax Americana that that has shaped American policy since its foundations, having now reached 450,000 copies in print worldwide and still is profound reading, now updated to discuss the latest weapon in their arsenal in continuing their global reach: the remote-controlled armed drone.

Andreas, a professor of sociology, breaks it down in layperson terms yet with detailed accuracy starts with the expansionist plans of the United States formed straight after the American Revolution, known as the Manifest Destiny (and later the Monroe Doctrine), with their push westward and near-genocidal policy against the Native American populace and stretching across the Pacific and southward into Latin America for the military-industrial complex, with little or no regard to other countries’ sovereignty – they’ve invaded Canada at least five times since 1775 (and defeated on each occasion) – with a show of arms to enforce it.

Fast forward to the post-World War II era to the present, the book also shows the “successes” and failures of an empire in decline since the Korean War and public opposition to these tactics their government had engaged in from that period to the current battle against the Islamic State of Iraq and Syria, not in for the fight against tyranny it states on the surface but mainly for the control of natural resources and a hope for regime change or better yet, a more favourable despot they can establish and support. 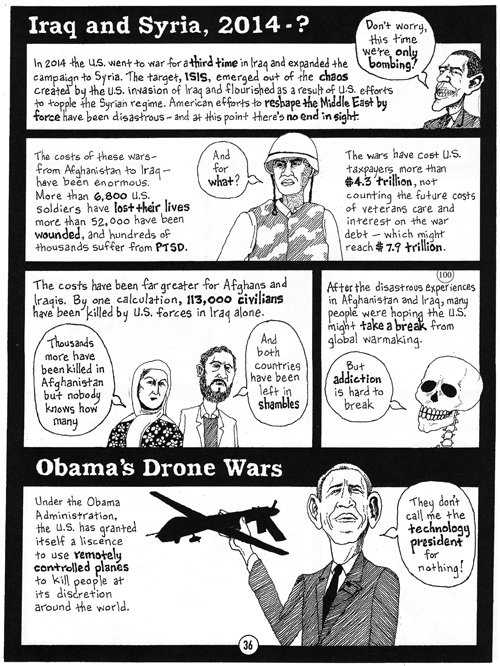 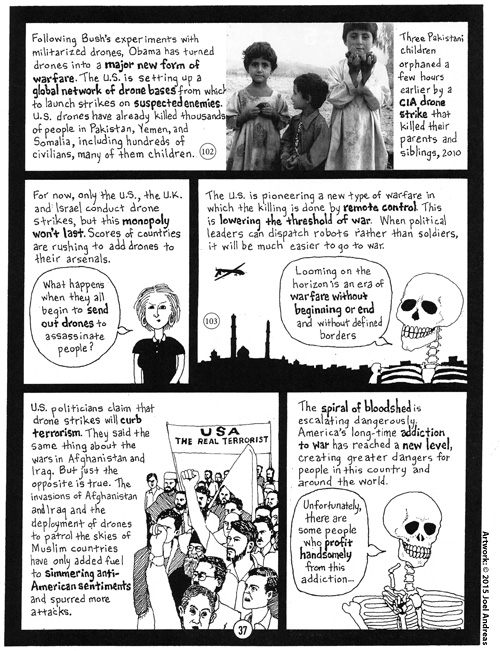 But Addicted to War more than just does a finger-wagging job at using guided missiles to shore up a misguided foreign policy. It also slams the detrimental costs on its domestic “tranquility” it claims to nurture on its citizenry’s well-being – and environmental damage – by sacrificing social programs and local infrastructures in favour of some new tech toy of the week that maims and destroys lives, not to mention the toll it takes on its overstretched armed forces.

For all its bloodied gloom and dark history bounded in these pages, Andreas shines a little ray of hope courtesy of an equally powerful anti-war and –military stance by their national and global community willing to take a stand against these actions done in their name, even amidst the drumbeats of war that seem to drown them out via compliant media outlets that eventually stop pounding when certain battles don’t turn out in their military, government and multinationals’ side and soldiers start coming home in coffins more often than not.

Though it tends to shed more and more of its original pages from the first edition that could have been allowed to expand the book more, Addicted to War remains a modern anti-war/anti-corporate manifesto classic standing the test of time in showing the ugly side of American militarism that can’t be salved by any propagandist ointment. Still a recommended reading.

To order this book, visit akpress.org.