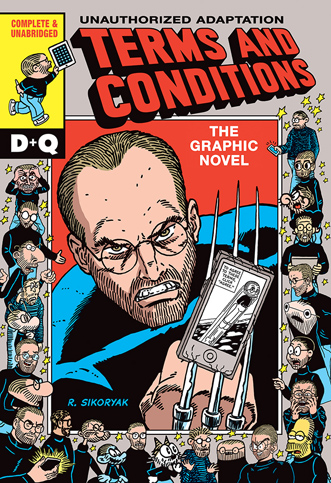 It’s the contract everyone agrees to but no one reads, the iTunes contract from any Apple product; because as anyone will tell you that going over any kind of legalese no matter how important, is enough to make your teeth fall out from the sheer boredom of it all (unless you’re a attorney). For the award-winning cartoonist R. (Robert) Sikoryak, it’s fodder for subversive satire that he’s known for with Terms and Conditions, now compiled into book form in where he adapts the entire Apple legal form in using their products into something fun, twisted and yet a tribute to past comic creators and founder of the Apple Computer empire, Steve Jobs.

Cramming the digitalized contract from its recent update at the time of this book’s print (October 21, 2015), Sikoryak takes classic comic strips and/or book characters from Snuffy Smith to Brenda Starr – and yes, not even the superhero universes of DC and Marvel are spared here, either – with the text all narrated by the late inventor/CEO in his trademark black sweater, five o’clock facial shadow, jeans and Coke bottle-rimmed glasses, only in various incarnations drawn in the same styling as their creators. 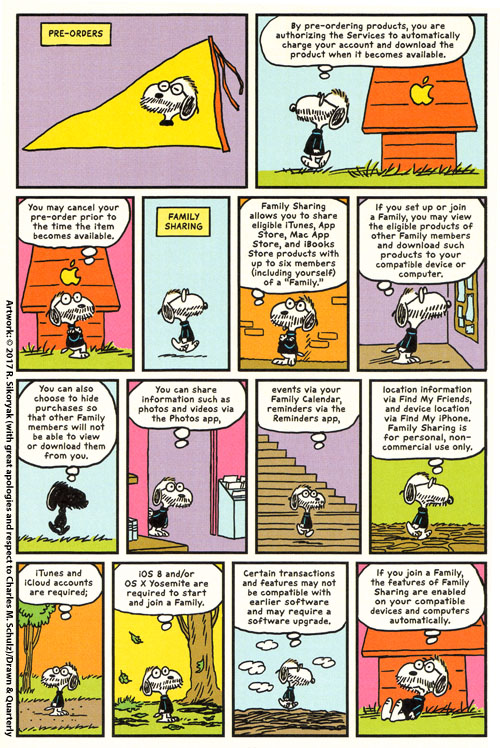 A Peanuts Sunday strip classic from 1971 gets a remake in Terms and Conditions with Snoopy’s college BMOC alter-ego Joe Cool as Steve Jobs explaining a section of the Apple iTunes contract.

Several examples of this comes from Jobs as Mike Mignola’s Hellboy engaged in a slugfest with a mechanical gorilla beast while listening to a iPod during the section “Use of Content”; in “Disclaimers of Warranties; Liability Limitations,” where he commandeers a page out of Alison Bechdel’s autobiographical Fun Home where she confronts her “father” whilst busily engaged with a Apple laptop or, in a delicious twist on the billionaire’s fortune, has him as the poor little rich boy himself, Richie Rich explaining a section of “Usage Rules” to the Harvey cartoon heroine Little Dot during a stroll on his palatial estate in regards to downloading content from its library.

What was once considered dry reading (but in fact, still is) is given a different perspective whether Sikoryak drafts Jobs as Charles M. Schulz’s beloved beagle Snoopy in his Joe Cool persona, Lynda J. Barry’s Freddie talking about “Apple Music Usage Rules”, hapless Homer Simpson discussing copyright laws over album cover art to Raina Telgemier’s father on about high-definition products within “Season Pass, Multi Pass, iTunes Pass” over dinner with a lighter touch and slight giggle to how incredibly drab it is, makes it all bearable. And no, since this is pretty much a parody of both the agreement and the creations he emulates, a copyright infringement suit wouldn’t stick – probably much to his targets’ chagrin. 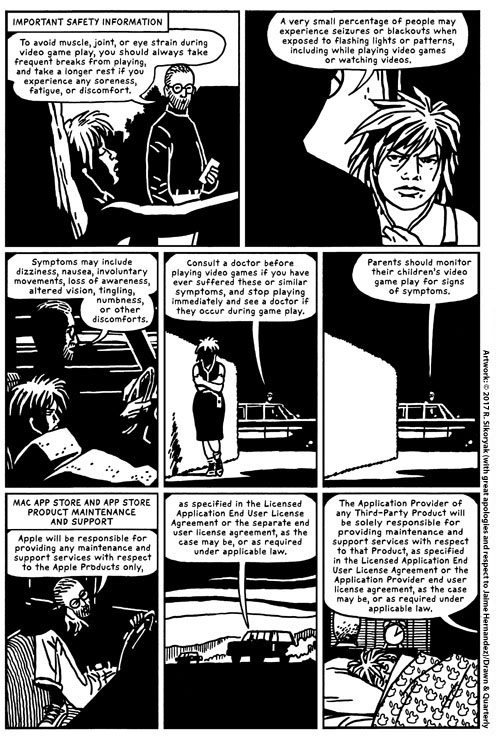 Alt-comics pioneer Jaime Hernandez’s Love and Rockets has Steve Jobs “guest starring” in the 1987 story “The Return of Ray D.” in Terms and Conditions.

Sikoryak cunningly has created, with Terms and Conditions, into a sort of iTunes Contract for Dummies where Jobs gets reimagined as a superhero, everyperson, supervillian, fantasy character and then some, along with his inventions that changed the world here while giving a redress on how technology and pop culture itself has a hold on us.

R. Sikoryak will make an appearance at this year’s Toronto Comics Art Festival (May 13-14); admission is FREE. For more information, visit torontocomics.com.

Celebrating the founding of his then-unconventional company that dared to mix classical ballet, contemporary dance and theatre into one and become an international darling with dance fans and critics alike four decades ago, the Eifman Ballet St. Petersburg make their third Toronto appearance in four years this May with his 1998 masterpiece, Red Giselle, for a four-date run May 11 to 13 at the Sony Centre for the Performing Arts (1 Front Street East) and is the only Canadian stop on their current world tour.

The production is based on the life of the legendary Russian ballerina Olga Spessivtseva, who immortalized herself with her performance of Giselle in the early 20th century and was adored worldwide.

But when revolution came to Russia over a century ago that made it nearly impossible to remain, Spessivtseva fled into exile and continued her storied career for another twenty more years, only to be consumed by her nagging fears and nervous breakdown in 1943 that would send her to a mental institution where she remained until her death in 1991 at age 96.

“Our ballet is dedicated to Olga Spessivtseva, one of the greatest ballerinas of the twentieth century,” said Eifman in his explanation behind the idea for Red Giselle, accompanied to the music of Bizet, Sсhnittke and Tchaikovsky. “I was astonished when I learned the details of her life: the unique actress bathed in glory and worshipped by fans and critics, spent twenty years in an asylum outside New York. The tragic emotions I felt, became the impulse for creating the ballet.”