What do Sarah Polley, Stanley Kubrick, Bruce Cockburn, Wes Anderson and Alice Munro have in common? At one point or another they’ve used the art of Alex Colville to visualize or implement their own work. His death last year left a gaping hole in the contemporary Canadian art scene, even among those who weren’t familiar with the name but have seen it upon recognition. Planned before his passing, the new retrospective of Colville’s art at the Art Gallery of Ontario pays a dignified tribute to one of this country’s celebrated painters.

Born and partially raised in Toronto, Colville lived in rural Nova Scotia for the remainder of his life, painted not only of hat he saw of the characteristics of Canada but of the world, often as a clear and present ominous one and of life’s twists and turns expansively. Giving us those viewpoints mixing in those elemental surprises and meanings is what, as the view will see, made him an exceptional talent.

Although the exhibit opens to one of his best known works “To Prince Edward Island” alongside a video clip loop of Anderson’s Moonrise Kingdom to nicely compare his influences, it starts with two least-known facts about Colville: firstly, he designed the 1967 Centennial coins as commissioned by the Royal Canadian Mint, as seen in William Eakin’s reprinted prints on paper; echoing the commonality of Canadians at the time of his simplistic designs of animals on them. Now extremely rare finds in the average cash register, Colville then had the pulse of his fellow citizenry in the currency they carried around for years. 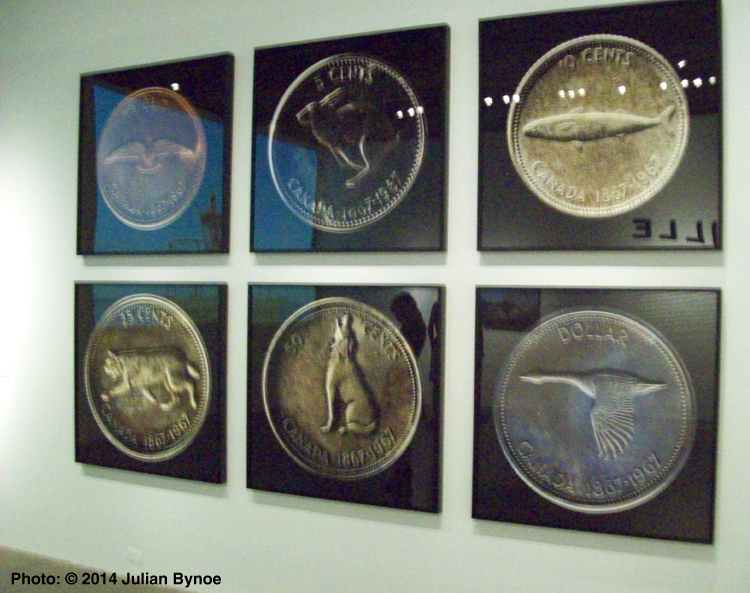 The other fact is that he was an official War Artists during World War II that launched his career, has the unrecognizable handiwork of his experiences stationed in the Netherlands in the war’s waning days. Shown in “The Nijmegen Bridge, Holland,” “London Bridge” and “Infantry, near Nij, Holland” done with watercolours there’s a more muted tone and composition to capture the grey bleakness of the landscapes of a liberated Europe. Then it becomes more stark and dramatic through his sketches and studies with his witnessing the aftermath of the Bergen-Belsen concentration camp of corpses with graphite and coloured pencils he’d later reproduce for an oil and canvas painting. Deeply affecting him for the rest of his life, the classic “Soldier and Girl at Station” reflected the returning veteran to the home front of a misty night time arrival and romantically chaste embrace of the two on its glazed tempura on hardboard says all the foreboding and strained relief in one painting.

During his teaching tenure at Mount Allison University in Sackville, New Brunswick until retiring to take up painting full-time, is where is technique and approach becomes its most familiar and made him a name in the art world in the commissioned mural by his alma mater, “Athletes,” done in oils and synthetics on board over how he could juxtaposition figures. From this, meditative pieces “Ocean Limited,” “Professor of Romance Languages” and “Mr. Wood in April” of people consumed with their own personal memories and thoughts in brooding states of mind to the mundane of the everyday (“Woman at Clothesline,” “Embarkation,” “Main Street”) is clear on what Colville was saying to us. 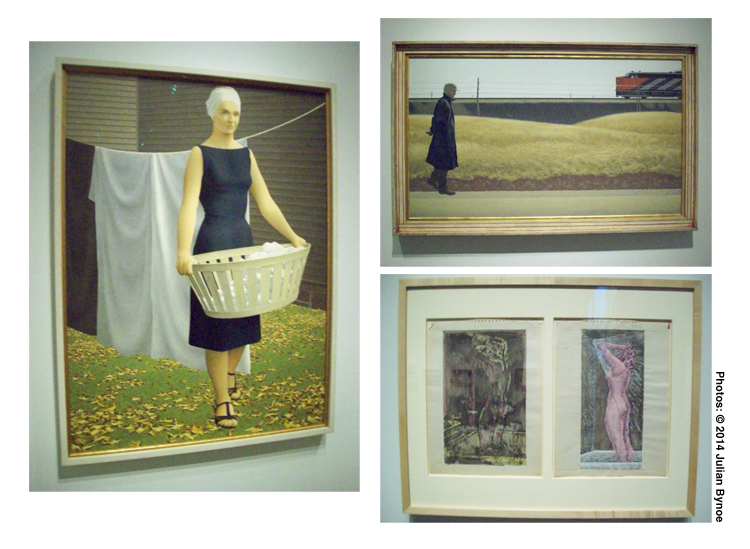 Historical narratives also play a part in the exhibit, be it our won in “French Cross” about the British expulsion of the Acadian community in Nova Scotia in 1755 or other countries for “Horse and Church” over the John F. Kennedy assassination; are both gentle if blunt reminders of loss and connection. Relationships are explored in “January” and “Western Star” between ourselves as much as they are with the animal worlds of “Dog and Groom,” “Waterville,” “Coyote and Alders” or “Cyclist and Crow.” And even the relationship between artist and viewer over personal interpretations (of art or otherwise) through “Target Pistol and Man,” “Horse and Girl,” “Traveller” and his famous masterpiece “Horse and Train” to come up with our own conclusions remain interesting to what comes to mind.

Dark as his imagery may have been to some – Colville said it was never intentional – there are hints of sentimentality from his paintbrush, be it waxing nostalgic for “Milk Truck” and “Circus Woman” of bygone eras to never-before seen works of a couple of self-portraits, “Woman in Shower” and his final painting “Woman with Clock,” his most personal about his wife, muse and some-time model Rhoda whom he shared a 70-year marriage with, shows a tenderness and devotion up until her death before his own eight months later.

You’ll need some time to go through and absorb this retrospective on what Colville saw and conveyed about postwar Canada and a generalized world of constant change and flux though his quasi-photorealism, emotions and the curveballs of life. It’s not every day one sees a Canadian original like Colville, so this exceptional exhibit gives us a taste to what he saw in this country and the human condition is about.

“I want cinema to contribute to argument, to antagonism, to anger, whatever, but always related to human affairs and human decency.”

For its 39th edition, the Toronto International Film Festival (TIFF) intends to live by those words with not only their line-up of national and international cinema come September 4 to 14, as they’ve come up with some new additions to the fest to draw in those who want a bit more to go with the usual films but to attract the average non-fest goers with a street festival and a new international shorts programme in the mix alongside the 329 films – 31 of them Canadian, 24 making their world premiere – up for viewing this year from 79 countries.

“Toronto can anticipate another remarkable line-up of films,” said TIFF CEO Piers Handling. “Cinema’s collective and transformative experience lives at the heart of our Festival – an sentiment that inspires global dialogue rippling through the selections revealed [here]” with the new Artistic Director Cameron Bailey concurring: “We can’t wait to present the new films from some of cinema’s brightest talents. This year we’ll welcome filmmakers from France, Germany, China, the U.K., the U.S. and more to red carpets in Toronto.”

To further show that South Korea has contributed to the world more than just Psy’s “Gangnam Style,” the sixth City to City spotlight shines on Seoul with eight new films on the calendar that includes cop melodrama A Girl at My Door; heist noir-actioner Confession; the rom-com Gyeongju; a hardboiled hit-and-run whodunit A Hard Day and Scarlet Innocence, about a university professor losing his eyesight and finding love in this modern-day version of a old Korean fairytale.

New to TIFF is Festival Street, where King Street West from Peter to University Streets will be turned into a pedestrian promenade from multidisciplinary performances to food trucks for the opening weekend of September 4 to 7, featuring Telefilm Canada’s Live Game Show; local musicians Adrian X, Absolutely Free, DJ Misty to Rich Aucoin; the animated film instalment Rearview Mirror; sketch plays by the Toronto Fringe and in anticipation of TIFF Lightbox’s forthcoming Stanley Kubrick exhibit (see below), the HAL9000 Photo Booth.

And Short Cuts International makes its debut with four programmes, like its Canadian counterpart; of various shorts from around the world like the hard-hitting Congolese doc Chop My Money, Icelandic lesbian comedy Playing with Balls, timely Mid-East Conflict thriller The Warren, the dark Qatari tale Eye & Mermaid, Macao’s Tricycle Thief to the animated giggle about life from the Netherlands, A Single Life. 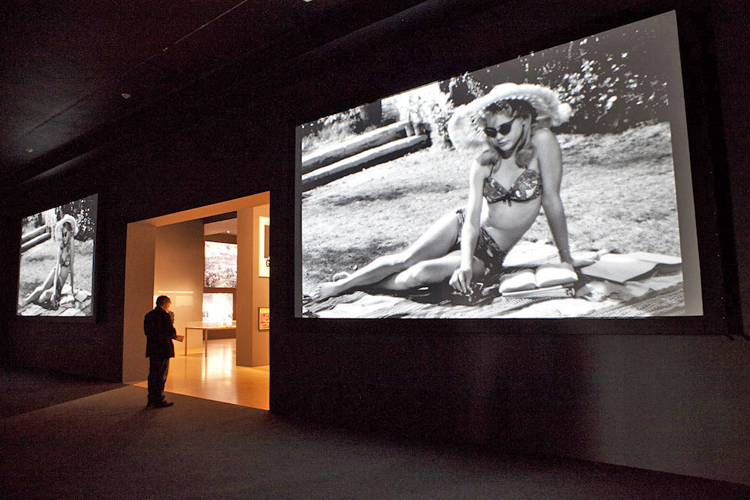 In his last full interview with Rolling Stone’s Tim Cahill that he rarely allowed, Stanley Kubrick was asked on why he never provided any easy answers in any of his films in how to react to them for viewer or critics alike, to which the master auteur replied plainly: “That’s because I don’t have any easy answers.”

As enigmatic and eccentric as he was, Kubrick kept his life and works a closed book up to his death in 1999. Now film lovers and fans will get a chance to see the (hidden) meanings behind his cinema in the highly-anticipated blockbuster touring exhibit Stanley Kubrick coming to TIFF Lightbox this fall and its only Canadian stop, starting October 31.

“As an organization dedicated to cinema and its visionaries,” stated TIFF CEO/Director Piers Handling, “it goes without saying that we are delighted to be hosting Stanley Kubrick [this October] at TIFF Lightbox.”

Put together by the Deutsches Filmmuseum, Frankfurt am Main and his estate, about 325.1 square-metres of selected material of his entire career will blanket the HSBC Gallery space from his early days as a photographer of the long-defunct LOOK Magazine to his final and posthumous film Eyes Wide Shut; which all became publicly available in 2003 and stored at the Stanley Kubrick Archive at University of the Arts London, through his widow Christiane and her brother Jan Harlan, who was also Kubrick’s producer on many of his film and brother-in-law.

“Kubrick was one of the most influential directors of the 20th century,” added TIFF Artistic Director Noah Cowan, prior to his departure for the San Francisco Film Society this past March; “and we’re thrilled to showcase the genius and creative process behind his films through this comprehensive exhibit,” to which this is no exaggeration. Planned for display are the original costumes and props from his thirteen films like The Shining’s twin sisters’ dresses to Private Joker’s “Born to Kill” helmet from Full Metal Jacket; the various filmmaking equipment he used like the ultra-fast Zeiss lens used to shoot the candlelit scenes in Barry Lyndon, among other items.

Also included will be Kubrick’s unrealized projects, including his dream biopic Napoleon and Holocaust drama Aryan Papers of his pre-production notes and highly-advanced research into both films that took years – even decades – to patch together; plus plans to screen his filmography and short films, as well as Kubrickian films related to them, will be announced.