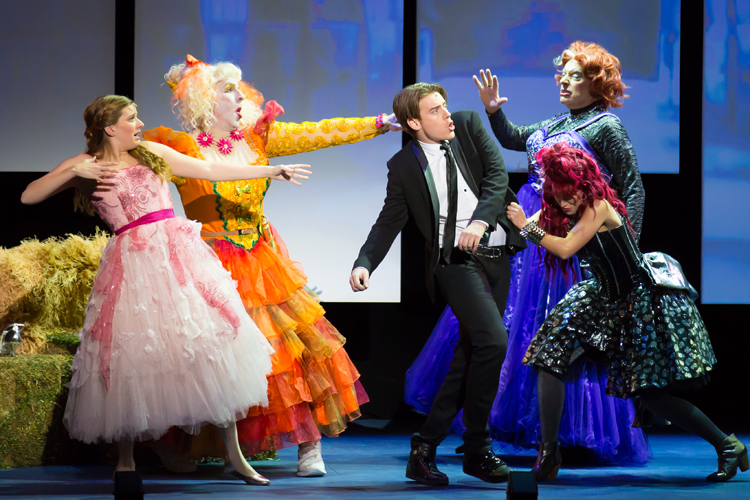 For his 19th holiday pantomime, producer and villain extraordinaire Ross Petty dusts off Cinderella at the Elgin Theatre for a “gags to riches” show that will leave you in stitches doing the usual skewering of the classic fairytale, current pop culture and such and pulling out a few more surprises along the way.

Our heroine (Danielle Wade) anticipates her having full ownership of her late father’s organic, GMO-free farmer’s market in time for her 21st birthday that gets sidelined by her scheming stepmother Revolta Bulldoza (Petty) and her spoiled, screechy stepsisters Nastine and Shakiki (Bryn McAuley, Cleopatra Williams) by slipping in their snack product of a questionable kind, Hypno-Chips, that soon grows popular around town with world domination on their minds.

Meanwhile, hunky pop star Max Charming (Jeff Lillico) looking to show his charitable side in sponsoring a children’s healthy snack program run by Cinderella and find true love, gets drawn into a reality TV/masquerade Elig-Ball at the Casa Loma by his agent (Reid Janisse). He accidentally bumps into Cinderella en route to the dry cleaners for Revolta and her daughters’ dresses for the big event they managed into get into and the two hit it off almost instantly, including an invitation to the ball.

When she’s barred from attending, Fairy Godmother Plumbum von Botox (Dan Chameroy) comes to the rescue – and even more chaos in store – as they try to stop Revolta’s evil plans in getting Max to endorse Hypno-Chips before the stroke of midnight and save everything Cinderella holds dear to.

This year’s panto has a lot more going for it aside from actor/writer Janisse fully fleshed script, the tight choreography of Robin Calvert, Michael Gianfrancesco’s colourful costuming and set and very good projection designs from Beth Kates and Ben Chaisson under Tracey Flye’s paced direction in keeping it all together, although the only complaints here are that the first half feels long in tooth and Wade’s stage time in that part is limited (she is the leading star) until the second half.

Wade and Lillico are both in good voice in belting out the new and old pop covers along with the cast. Chameroy’s cornier and hornier than ever as his fifth incarnation as Plumbum in Petty’s panto, Eddie Glen in his eleventh year as the suffering sidekick/ally, does it with fervour and the King of “Boos” Petty is devilishly divine even in allow Williams and McAuley do a neat Salt-N-Pepa-like rap act on the onset in sharing the comical baddie role for all its worth.

From the parodies of Wayne’s World and CBC’s Murdoch Mysteries to the come-by-chance adlibs, Cinderella is a fast, furiously fun time for the whole family, double entendres included; despite the long running time that could have shaved a few minutes but nonetheless still remains entertaining. 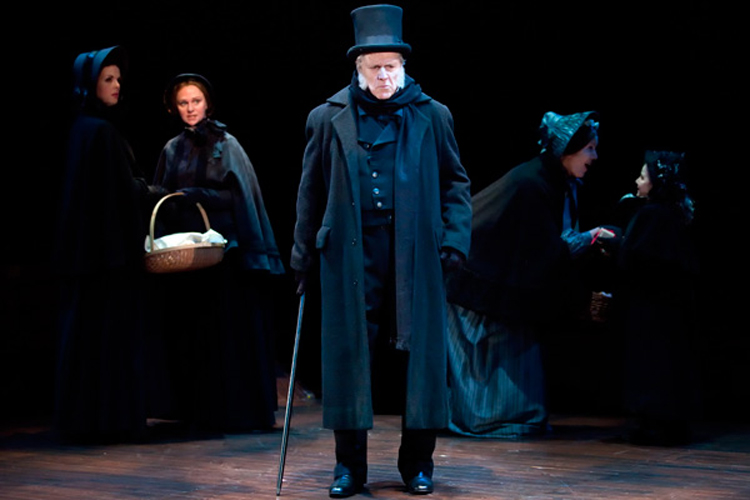 As it always starts out with Michael Shamata’s adept adaptation of Charles Dickens’ A Christmas Carol, a theatrical ghost light burns brightly onstage before it gets turned off by its narrator to “let the spirit world know it is welcome here, for after all; this is a ghost story” in Soulpepper Theatre’s biennial holiday production’s fabulous return, whether one has seen it for the first or umpteenth time, that pleasantly haunts.

In a very prosperous 1800s London accounting house of Scrooge and Marley, surviving partner Ebenezer Scrooge (Joseph Ziegler) could care a toss about sending his debtors to prison for unpaid dues, his harried clerk Bob Cratchit (Oliver Dennis) and his personal woes and certainly not his good-natured nephew Fred’s (Gregory Prest) holiday cheer, let alone everyone else’s when there’s money to be made. And charity for the less fortunate? Bah, humbug!

Alone in his manor on Christmas Eve, Scrooge is haunted by Jacob Marley’s ghost (John Jarvis) who warns him of the errors of his miserly, miserable existence as he once had in life and wants him to avoid his fate in the afterlife by sending him three ghosts of Christmas Past, Present and Yet-to-Come (also Jarvis) to resurrect the goodness long driven from him.

Through these visitations, we find out – including Scrooge himself – the origins behind the financier’s darkness of lonely boy who harboured his imagination as his best friends and a beloved older sister (Ava Arrindell) to a strapping young warehouse apprentice who made merry under his benevolent employer Fezziwig (Kevin Bundy) later to be blinded by ambition so much that is drives away a lost love (Sarah Wilson); contemplates the fate of the play’s heart and soul Tiny Tim Cratchit (Kevin Gordon) that slowly but surely unclenches his tight-fisted attitude towards Christmas and the world in general to his eventual salvation.

Always a joy to watch, this Carol strips away any fancy spectacle in John Ferguson’s simplistic set and costume designs and Alan Brodie’s lighting to maintain humbleness and avoidance of materialistic decadence so often associated with the season that its reason has been forgotten as the story does remind us of, in particular to the Cratchit household scene that, while poor in state, has an abundance of love and warmth Scrooge lacks so much in his own palatial estate.

Ziegler remains brilliant in the lead role from being curmudgeonly nasty to his infectious redemption, backed by an equally fine cast under Shamata’s guidance all within a 360°-seating that’s pretty ingenious in itself, never fails to teach the audience the principles of charity and humanity that is capable in all of us with this production in mind. Highly recommended.