A prehistoric romp with heart

Making up for lost time with a second studio release after a year-long silence (and a first for them), Pixar’s The Good Dinosaur may wax a bit of The Flintstones meets Finding Nemo here in the storyline, but at least it has some heart involved other than its gorgeous animation and fully-realized characters without reverting into some soulless filler like Disney tried to do with the Pixar throwaway Planes franchise of the last couple of years.

Reimagining what would have happened if the meteorite that supposedly wiped out the dinosaurs on our planet 65 million years ago had missed and were allowed to thrive and evolve; the story zooms a few million years later after the fact to an agrarian yet still primitive world as we see the young Apatosaurus Arlo (Ochoa) grow up on his parents’ farm on what looks something like present-day Wyoming. Shy and timid about the environs around him due to being a runt, compared to his rambunctious brother Buck (Marcus Scribner) and playful sister Libby (Maleah Padilla); his tough if wisely gentle father Henry (Wright) tries to get him to over his fears by giving him a job in protecting their harvest against the “critters” constantly eating it in their storage silo.

When a tragic accident takes Henry in chasing one of the critters, guilty Arlo goes out of his way to rid of the beast – that happens to be a resourceful prehistoric caveboy (Bright) – that takes him and the boy away from his Claw Tooth Mountain home. Scared and alone, he forges an uneasy alliance with the boy he inadvertently names Spot, who in return teaches him how to survive against the predators out there like a psychotic group of pterodactyls led by one Thunderclap (Zahn) and other of nature’s harsh environments that slowly, but surely creates a bond between them.

It could be easily dismissed as some cute “a dinosaur and his boy” tale for the kids, director Peter Sohn does touch base on learning to face and overcome our fears that impede us through life screenwriter Meg LeFauve shapes around while also turning it into a homage to the cinematic Western. This is no more evident when Arlo runs into some cowboy-like Tyrannosaurus rex family herding against rustler-like raptors consisting of its leader Butch (Sam Elliot) and his son (A.J. Buckley) and daughter (Anna Paquin) who part a little worldly wisdom about fear itself and not letting it conquer you that is Good Dinosaur’s pivotal moment.

Ochoa voices the tender-hearted dino with some realism to Arlo’s fears in a childlike sense and makes a decent match with his human counterpart with quasi-canine tendencies (hence the name Spot); Zahn is wickedly perfect as the twitchy flying villain; Wright and Elliot are the deep, philosophical father figures who know when to say the right thing, but its all-too brief and highly comical part goes to Sohn for also voicing Forrest Woodbush, the oddball pet-collecting Styracosaurus, is a scene-stealer in itself. Though it’s kind of questionable to have a psychedelic intoxication scene involving the two main heroes in a family film, The Good Dinosaur demonstrates to its audience on the test of courage and the value of friendship that goes a long way in its message that makes it a reasonable winner, along with its stupendously good country music-laced score done by Jeff and Mychael Danna. 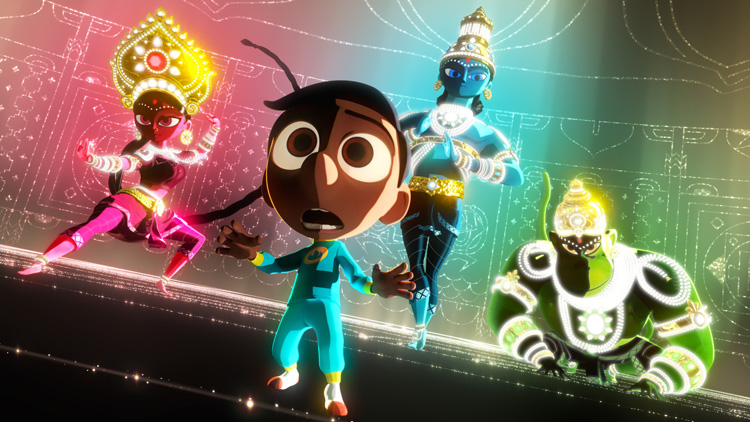 The preceding short Sanjay’s Super Team, loosely based on director Sanjay Patel’s own childhood; where his TV cartoon-loving younger self turns a seemingly boring Hindu ritual by his observant father into a superheroic battle between good and evil done mostly in pantomime, is the most inventive Pixar short in ages in showing the power of the imagination and a father/son bonding that will touch and engage the viewer and is much better than their last short, Lava. 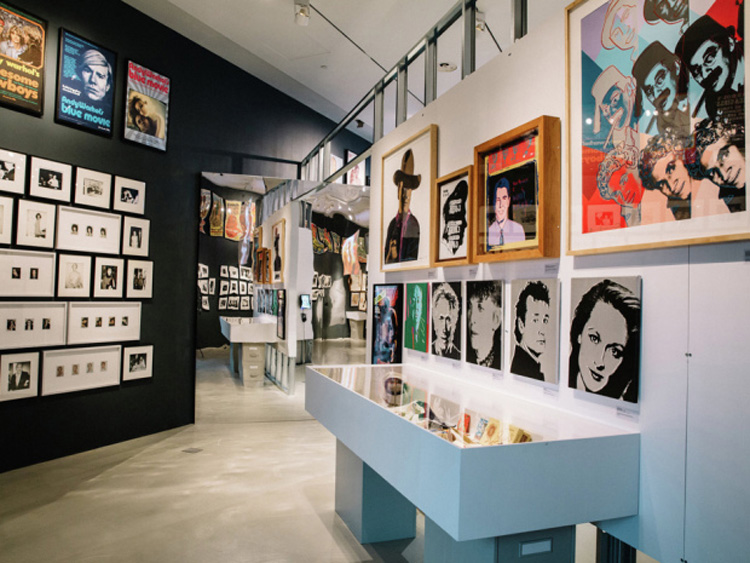 One of the thousands of photos and artwork adorning the TIFF Lightbox exhibit Stars of the Silver Screen, delving into iconic artist Andy Warhol's personal collection of celebrity memorabilia and the culture stemmed from it that made most of his work.

Celebrity fandom, like trends in music and film, is fleeting in any society that idolizes its well-known figures throughout history, but no more so than in the entertainment and art circles. Andy Warhol knew this, since he himself lived and breathed the very same worlds of his day and continues, as so demonstrated in the TIFF Lightbox blockbuster exhibit Stars of the Silver Screen, which in turn he showed how no one is immune to such trappings in an expansive presentation.

Finally all catalogued just two years ago (!) of his personal collection and artwork three decades after his death, the bulk of the exhibit is all on cinematic heroes and heroines from the mid- to late-twentieth century starting off with young Andy Warhola – before he dropped the last “a” from his name – growing up in Depression-era Pittsburgh as a means of escapism of the period, as well as his emotional and physical planes.

Starting with a display from his childhood collection of 1930s movie star glossy photos and kept in scrapbooks (some even autographed by the likes of Harry James and Jane Russell; there’s way too numerous photos and film posters around the exhibit to count), paper doll cutout books of Ann Sothern and Claudette Colbert and a real piece of bric-a-brac, a cobalt blue Shirley Temple creamer that stands out. And the obsession with them continued into his adulthood when Warhol could afford such items of celebrity clothing like Jean Harlow’s black dress with silver panné and gold lamé sleeves that still looks good next to Clarke Gable’s spectator shoes he wore in their 1936 romantic-comedy Secretary vs. Wife.

Warhol’s look at stardom is no different than consumer objects, as he saw them both advertising products currently in fashion, but perpetually at risk of obsolescence making a stark point, including his earlier art works made for his own self like his simple, oft-crooked ballpoint pen sketching on Manila paper made in 1956 “James Dean – Dead” in response to the matinee heartthrob’s car accidental death or more whimsical pieces involving “Princess Grace’s Pillow” of graphite pencil scribbled on tracing paper.

Of course, the Pop-Art Andy is what is the exhibit’s main attraction and there certainly is no shortage of it with enough Marilyn Monroes to go around and recycling nostalgia was the man’s forte in the last decade of his life of screen prints of Judy Garland, Grace Kelly, Liza Minnelli and such are evident. One in particular is “Judy Garland and Liza Minnelli” circa 1979 of an acrylic and silkscreen on canvas project of both mother and daughter of their lives together from infancy to adulthood is an endearing tribute.

For the man who coined his most famous phrase: “In the future, everyone will be world-famous for fifteen minutes,” it becomes emphasized in the Superstars section focusing on the average personalities that orbited Warhol’s circle at The Factory in New York where he shot most of his avant-garde films that video screens above play in loops, San Diego Surf for example; of the underground artists of the Manhattan scene of the 1960s like Taylor Mead to Viva (born Janet Susan Mary Hoffman) at their most outrageous to the sublime. 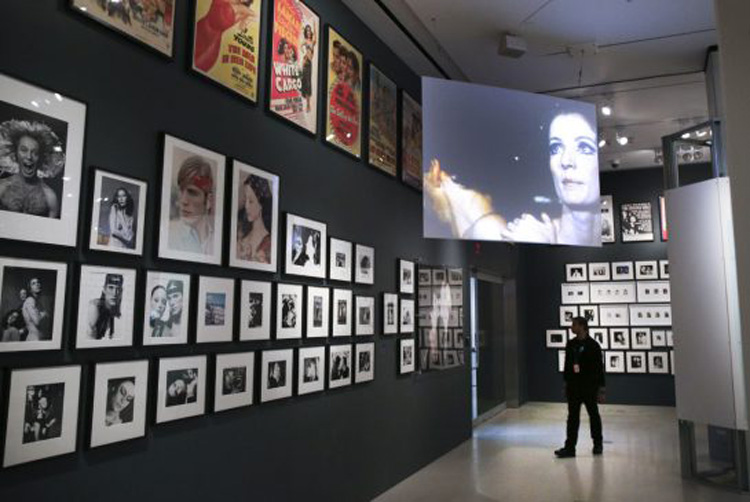 The Andy Warhol exhibit Stars of the Silver Screen's Superstars area where the Pop-Art legend's circle of contemporaries made their names, if only briefly.

Some oddities around Silver Screen feature one of his rare political pieces “Reagan Budget” right next to the more colourful “Ads: Van Heusen (Ronald Reagan)”; memorabilia from the 1982 French film Querelle include a French navy sailor’s cap and uniform plus the film poster and soundtrack album cover he personally designed; some interestingly done spec and realized work he did for Time Magazine covers involving chromoline lithograph prints proofs of The Deer Hunter and Coming Home and camouflage patterns in regard to a feature on the rise of Vietnam War topics in American cinema in the late 1970s to a tonal collage on the Fonda acting family used in the February 16, 1970 edition and, believe it or not, a semi-grainy copy of a 1985 episode of The Love Boat, where he became its 1000th guest star for its 200th episode that’s sort of funny in clips.

In the Silver Factory room section, it houses Warhol’s filmmaking tools recreate what it probably looked like back when he shot over five hundred shorts and screen tests in a two-year period, is a curious one with some of the shorts in constant running. Upon exiting, don’t rush past Warhol’s experiments with the episodic television medium (1980-83’s Andy Warhol’s TV to the MTV-based Andy Warhol’s Fifteen Minutes; that ironically ran half-hour segments) that preceded today’s reality television and social media (as I once said in regard to another Warhol exhibit review years ago, just imagine what he could have done had he lived to see the internet) or the evolutionary development of his long-running Interview Magazine from the very first black-and-white copy to the polished and professional full colour version. 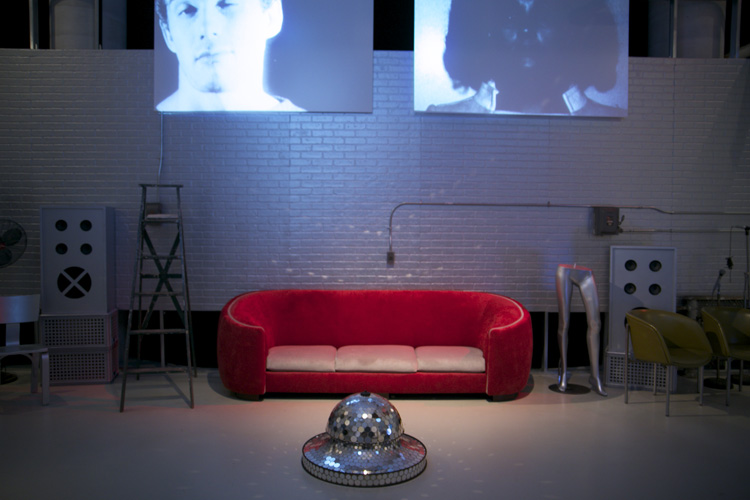 The Silver Factory room section at TIFF Lightbox’s Andy Warhol exhibit Stars of the Silver Screen recreates his New York Factory studio filmmaking period, where most of his Superstars got their screen tests and some experimental celluloid were made in the 1960s.

Give yourself some time to absorb Stars of the Silver Screen with a exhibit of this magnitude, because some of these have never been seen by the public considering it’s from one of the most public art figures around in how much he held the concept of the celebrity and its societal disposability is certainly reflective. Damn, given how much this collection boasts, Warhol would have gotten his very own celebrity reality-TV project on his hording alone.