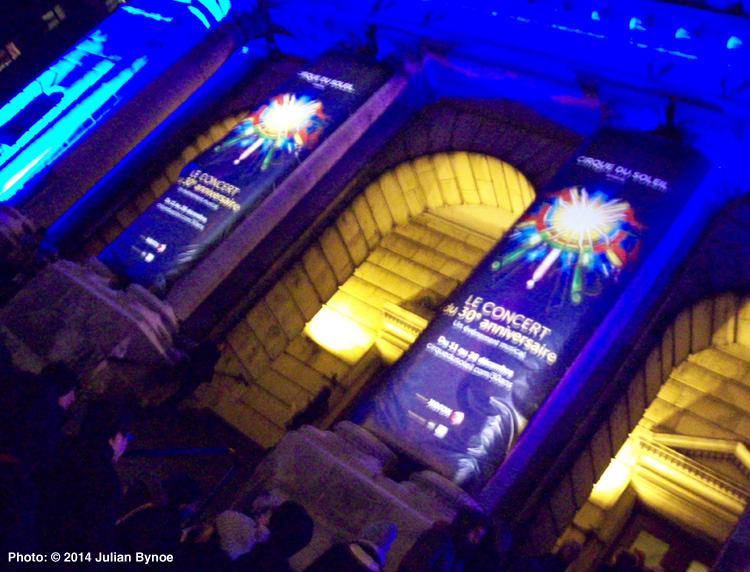 Waiting briefly outside the Saint-Jean-Baptiste Church in Montréal on the chilly December 13 opening night of Cirque du Soleil’s The 30th Anniversary Concert, A musical event.

MONTRÉAL – You only turn thirty once and Cirque du Soleil does it in a grand yet humble style for just a two-week residency holiday show The 30th Anniversary Concert, A musical event in a vision of sight and sound by taking a trip through time and around the world with the little neo-circus that could at the venerated Saint-Jean-Baptiste Church in a setting among the sacred without the profane of familiar and obscure selected songs from the 35 shows they’ve put on since its beginnings (only one omission from the playlist, JOYÀ, a residency show recently opened this month in Mexico but it’s a trivial one).

Under the direction of Daniel Fortin, 28 musicians, the 70-voiced Le Choeur du Soleil as led by master choir director Grégory Charles of young and old singers, ten artists playing central character Zoë from Quidam representing Cirque through the years as joined with eight soloists that have been part of the company’s history as it opens in the ominous “Ouverture” organ solo number as the original Zoë, Audrey Brisson-Jutras, sings “Atmadja & Réveil” in the costume and carrying a red balloon with Le Choeur filling the air setting the moment right of burgeoning and wondering innocence.

For its nonstop 75-minute ambience with the church’s acoustics nailing all the emotions, there are several Concert highlights to behold, starting with the trio of Mathieu Lavoie, Francine Poitras and Roxane Potvin doing Mystère’s operatic “Ulysse;” German cabaret-like “Vai Vedrai” from Alegría soloed by Poitras with two little Zoës playing patty-cake (which includes Brisson-Jutras’ own daughter, also named Zoé); “Nostalgie” and its English lyric version “Bridge of Sorrow” linking both O and DELIRIUM respectively, if only briefly.

Resplendent in a red and gold Asiatic tunic, co-writer/singer Anna Liani serenaded her romantic ballad “Mio Bello Bello Amore” from Zumanity with divinity as Le Choeur joins upfront with the performers finally with Brisson-Jutras for the powerfully mournful “Aftermath” from KÀ for all its orchestral glory. The ensemble soloists gather to do a uplifting a cappella of the Beatles’ “Because” from the Fab Four tribute show LOVE; while French chanson of Koozå’s “Don’t Be Afraid” with Brisson-Jutras and Dominic Dagenais crossing into Wintuk’s Latin jazzy “Shadows” and Poitras bridges BElieVE’s “Kayala and the Poppies” to the zesty tango of ZAIA’s “Ardor Oris” as images of the aerial acrobatics dance across the gilded dome ceilings, a reminder of Cirque’s bread and butter.

Estelle Esse and Le Choeur get together with Lavoie and Potvin for the show’s spine-tingling “Hymn of the Worlds” from ZED with pure harmony. Even the neo-Vaudevillian bumbler Banana Shpeel has a respectable moment with its own colourful light show for the tune “The Snake Dance,” preceded by the buoyant bossa nova of OVO ’s “Brisa do Mar,” as sung by Lavoie. 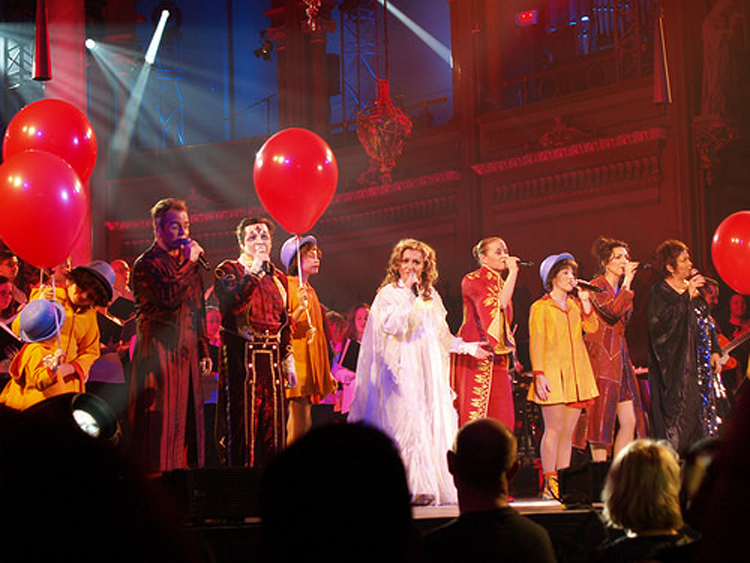 Towards its climax, all the Zoës return under the choral wonderment of IRIS ’ “Scarlett Balancing” and as one of them tears off down the aisle into the unknown to satisfy her sense of adventure and independent will during Amaluna ’s “Whisper,” are the pivotal moments Cirque has always sought through themselves and their audiences for three decades the spark in us all in the adventures they’ve taken them from their basic missionary motto: invoke, provoke and evoke. 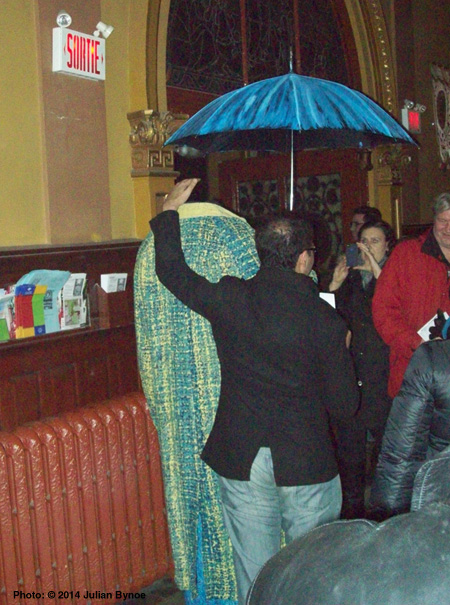 As it closes toward the grand finale with popular show tunes from Alegría and Saltimbanco, The 30th Anniversary Concert, A musical event isn’t overbearing or overproduced in any fashion through Bruno Rafie’s warm and majestic lighting bathing the venue and Mathieu Parisien’s sound design easy on the ears as Cirque salutes to their songbook (and others’) that keep their usual performances and characters tucked away in the background for a change to celebrate the music makers that have helped them along the way. For those spending the holidays or passing through in Montréal and Cirque fans (one couple I met came all the way from Switzerland just to see opening night), it’s a fantastical, delightful once-in-a-lifetime treat to catch. 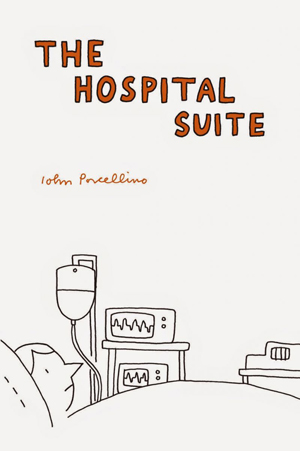 With the suicide death of beloved comedian/actor Robin Williams earlier this year, the focus on physical health connected to mental health issues got pushed to the debate on its impact on society as a whole and the devastation they cause on lives. One other voice adding to the discussion can be read in John Porcellino’s own battles with both, The Hospital Suite, gets done with light and dark humour abounded with serious momentum.

As the creator of the alternative mini-comic series King-Cat since 1989 and several other graphic novels, its starts with him living his life in Denver, Colorado with wife Kera and cat Maisie Kukoc when one day in 1997, he develops an agonizing pain in his abdomen. After a series of hospital stays and doctors’ visits, it turns out he had a benign tumour in his small intestine that drew in a section of his large intestine which was successfully removed.

Already besieged with health matters like hyperacusis (an ultra-sensitive hearing disorder) and an obsessive-compulsive disorder, Porcellino loses massive amounts of body weight, among other symptoms. Eventually recovering, the experience exacerbates his OCD over the smallest of things running from guilt, anger, depression, paranoia, depression and even suicidal thoughts that tax his marriage, day jobs and faith that would otherwise fell another person.

Trying out various diets and lifestyles, he finds solace in his creativity, spirituality and living in general that gives him reasons to keep on going and overcome his problems which he still grapples with, but at least he can control it to the best of his abilities and function within normal parameters. 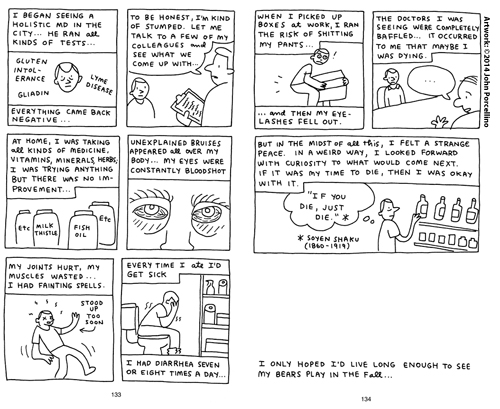 The Hospital Suite is an achingly human tale Porcellino is open to talk about our bodily fragilities and breaking points on how one can endeavour all this through his spare line drawings that’s made him a zine legend about the everyday on how some have to cope more than others is remarkable achievement in autobio comics, much like Harvey Pekar and Joyce Brabner’s Our Cancer Year (mentioned here too), and perhaps bring a better understanding on mental disorders.

Truly a survivor’s story, Porcellino’s frank and harrowing experience provides an insider’s account and yet still installs hope for others suffering worse (and also includes earlier works True Anxiety and Mercy, which inspired the creation of the book) for all its roughen nature it was meant to depict. Funny and moving, The Hospital Suite balances a person’s imbalances in how one can make it through the tough times.

Islam heads back into blues 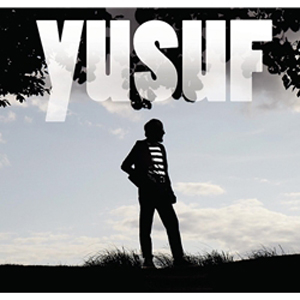 Just fresh off being inducted into the Rock and Roll Hall of Fame, Yusuf Islam – formerly better known as Cat Stevens – brings his first album in five years Tell ‘Em I’m Gone as a full circle back to his blues and protest rock repertoire that launched his career half a century ago as a pretty strong output, instilled with the familiar stamp of his personal philosophies on the broader outlook on life.

Bounded by acoustic jams and full-bodied pieces, Islam opens and closes out the album with his earthly and spirited messages with harmony with “I Was Raised in Babylon” and “Doors”, weaves a spellbinding memoir with “Editing Floor Blues” and pulls a couple of decent blues covers for “Big Boss Man” and “The Devil Came From Kansas.”

Islam brings onboard a South African vocal choir for a workers’ rights number “Gold Digger” and Malian Tuareg desert blues stars Tinariwen to guest on “You Are My Sunshine” and the title track, contributing a few lyrics in their native Neo-Tifinagh for good measure for a worthwhile effort under the wing of co-producer Rick Rubin keeping it all solid.

KURIOS OST puts on the ritz 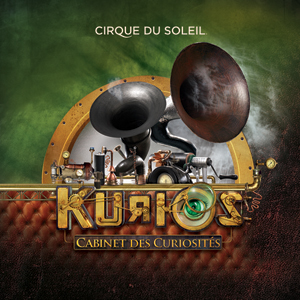 For its widely acclaimed show KURIOS – A Cabinet of Curiosities in marking their 35th show and thirtieth year in show business, Cirque du Soleil definitely puts on the ritz for the soundtrack release with veteran DJ/producer Alain Vinet’s mix of new school sounds that made them famous to Rob Heaney’s roots-rock background for their liveliest album in ages with finger-snapping tunes that easily quite win.

Composers Raphaël Beau and Guy Dubuc and Marc Lessard (a.k.a. Bob & Bill)’s bouncy electro-swing jazz pumps up the effervescence on “Steampunk Telegram,” “Clouds,” “Wat U No Wen” and best track “Bella Donna Twist” while paying tribute to the likes of Django Reinhardt and Stephane Grappelli (“Hypnotique”), Ástor Piazzolla (“Fearsome Flight”) and ragtime ditties (“Monde Inversé”) as vocalist Eirini Tornesaki gives it her all everywhere, including going ABBA-esque on the dramatic polish over “Gravity Levitas.”

“Departure” is KURIOS’ tranquil port in this sea of musical frenzy for its balletic overtures and “Créature de Siam” is a waltz-like dream to the Old Worldly “11:11” and fitting closer “You Must Be Joking.” Repeated listening to this album in its entirety is a must for jazz aficionados.