Go Rogue for this One

Screenplay: Chris Weitz and Tony Gilroy; story by John Knoll and Gary Whitta, based on the characters created by George Lucas

Riding high from last year’s relaunch of the Star Wars franchise with The Force Awakens, Lucasfilm takes ideas from the prequel trilogy and a memorable moment from Return of the Jedi when Mon Mothma speaks about getting the plans on the second Death Star; and is remarkably brought on for their first standalone anthology film, Rogue One: A Star Wars Story.

Taking place sometime shortly before the events of A New Hope, the Rebel Alliance hears about a brand new weapon from the evil Galactic Empire from their boldly ruthless spy Cassian Andor (Luna), who has to crisscross the galaxy in finding a orphaned convict named Jyn Erso (Jones) and Imperial pilot defector Bodhi Rook (Riz Ahmed), which both hold the key in learning about Emperor Palpatine’s latest toy, the original Death Star.

Finding out that Jyn’s lost-long scientist father Galen (Mads Mikkelsen) is the chief architect reluctantly under the command of the merciless Imperial weapons director Orson Krennic (Ben Mendelsohn), they also learn he has secretly slipped in a weakness in the seemingly indestructible space station, yet the Alliance feel their fight against tyranny is all for naught.

In defiance of standing orders, Jyn, Andor and Rook bravely lead a small ragtag group of soldiers that include Andor’s reprogrammed Imperial droid K-2SO (voice of Tudyk), blind Guardian of the Whills warrior-monk Chirrut Îmwe (Yen) and his assasin-protector friend Baze Malbus (Wen Jiang) under their self-anointed codename “Rogue One,” head off to the Empire’s archival base on the fortified tropical world of Scarif in a one-shot chance to retrieve the plans and deal the first blow to the Empire.

Under the helm of Gareth Edwards (2014’s Godzilla), he guides the A New Hope ’s prequel with a highly convincing balance of the new and familiar in pace and feel of action, drama, adventure and humour, thus making it the darkest chapter in the saga, even more than The Empire Strikes Back and Revenge of The Sith combined, through master screenwriters Chris Weitz and Tony Gilroy’s adapting veteran Industrial Light and Magic visual effects supervisor/co-executive producer John Knoll and Gary Whitta’s appealing back story fans will immensely approve.

And the film, much like the 1977 original that mirrored America in the post-Watergate/post-Vietnam era; is pretty much in step to today’s highly divisive post-9/11 world that is much summed up in Galen’s first confrontation with Krennic by commenting “You’ve confused peace with terror” to which the blindly-faithful Imperial stooge quite blithely retorts: “Well, you have to start somewhere.”

Jones, much like Daisy Ridley’s Rey in Force Awakens, is an accidental heroine with a troubled past and answers up to the challenge ahead with Luna as a brash Rebel spy willing to bend the rules as de facto co-leaders of the renegade team in their roles; Tudyk supplies the dark comic relief as K-2SO in contrast to the prissy, worrywart goldenrod C-3PO. And while Ahmed brings a noble courage-seeking Rook out to prove himself here, Hong Kong action stars Jiang and Yen act as the martial arts duo (and that lightbow bowcaster weapon Yen’s Force-sensitive priest wields here, I want that for Christmas!) and Mendelsohn’s great as the central chilly villain; but oddly Forest Whittaker gets a woefully small part as the aging breakaway cyborg rebel Saw Gerrera feels more like a unnecessary (yet essential to the storyline) supporting character here.

Plenty of action and thrills abound even when James Earl Jones’ voicing Darth Vader actually cracks a joke (!) in one key scene, yet is warmly welcomed here among the other A New Hope references with plenty of other neat surprises in store in this expansive addition to George Lucas’ space opera. Let’s see what the next anthology instalment, the Han Solo origin film come 2019, will keep this momentum as Rogue One: A Star Wars Story has done. 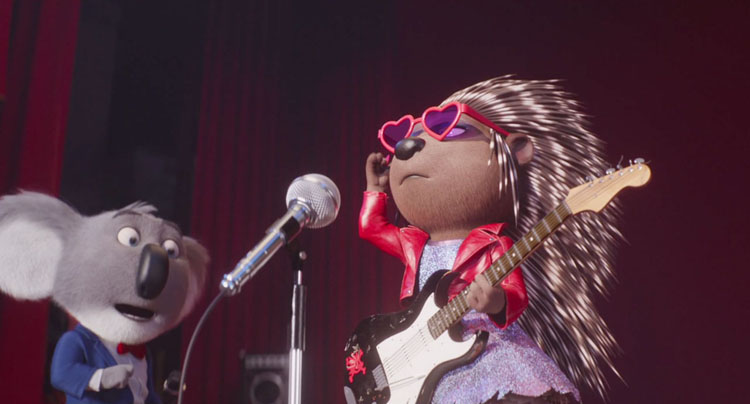 After landing a smash hit this summer with The Secret Life of Pets (with a sequel to follow in 2018), Illumination Animation comes up with the anthropological musical comedy Sing on the pursuit of dreams may be a jukebox musical using past and present pop tunes but at least it’s a jukebox musical with a heart and soul to it, unlike that 2015 noble failure Strange Magic tried to pull off.

Acquiring his lifelong dream of owning and running a huge theatre, Buster Moon (McConaughey) is a koala with an even huger problem: nobody’s interested in partaking theatrical productions in his metropolis like they did when he was a kid and now he faces foreclosure from the bank if he can’t pay off the mortgage soon. Looking to draw some attention, he puts on a The Voice-like singing contest with the cash prize of $1,000 but due to a goof-up by his elderly one-eyed iguana secretary Miss Crawly (Garth Jennings), the printout for the poster turns out for a $10,000 purse.

Drawing out almost everyone in town looking to chase their own dreams, Buster narrows it down to seven talented contestants: porcine homemaker Rosita (Witherspoon) initially reluctantly paired with a overly-enthusiastic disco inferno partner Gunter (Nick Knoll); Johnny (Taron Egerton), a young silverback gorilla with a golden voice and novice getaway driver for his career criminal father (Beck Bennett); the teenaged porcupine rocker Ash (Johansson) constantly being put down by her jerky boyfriend about her song writing skills; mousey crooner Mike (MacFarlane) with a large ego and a hustler instinct to match, and squeaking by as a accidental stagehand, the painfully shy elephant Meena (Tori Kelly).

Struggling to keep the theatre going in time for the big show and the nonexistent cash prize amount, Buster turns to his sheepish best friend Eddie (John C. Reilly) to get his rich operatic diva grandmother Miss Nana Noodleman (Jennifer Saunders), who remembers the theatre in grander times, to be his sponsor. However, in his attempt to win her favour by an act of pure desperation causes a major catastrophe and threatens to crush everything that everyone worked so hard to build up on.

The power of perseverance and to dream are the mainstays of co-director/writer Garth Jennings’ funny, energetic script and scrumptious animation almost rival to Zootopia , is equally loaded with laughs to entertain both kids and adults alike; plus the running satirical gag involving this one Japanese vixen pop aidoru (idol) quartet looking to get into the contest is a cute one.

The cast behind this motley zoological crew do have pretty believable backgrounds for their characters with McConaughey’s underdog impresario trying to shed being the town laughingstock for redemption; Witherspoon being the worn-out if not resourceful mom just trying to escape of raising twenty-five piglets and a husband who takes her for granted; Egerton’s primate who doesn’t want to live the gangster life and proving he’s better than his father to Kelly’s powerhouse pachyderm learning to master her crippling stage fright.

And they all have the comedic chops to boot and can sing very well, but since I wouldn’t want to give away who’s the best of the lot (although admittedly, my favourites are Egerton doing Elton John’s “I’m Still Standing” and Kelly’s a cappella rendition of Leonard Cohen’s “Hallelujah”), I’ll leave that up to the viewer to decide for themselves. Sing really does put a song in your heart both musically and figuratively in how to overcome life’s challenges, regardless of the odds.

Soulpepper Theatre takes It’s A Wonderful Life into a onstage marvel by its stock cast in re-imagined as a 1940s radio play – complete with “ads” (some shamelessly plugging their own events) – guaranteed to entertain any fan of the beloved 1947 cinematic Frank Capra classic.

Up in Heaven one Christmas Eve, The Boss (William Webster) instructs overseer Joseph (Derek Boyes) to let Clarence Oddbody (Oliver Dennis) finally earn his wings after a two-hundred year wait by becoming a guardian angel for loans manager George Bailey (Gregory Prest) of Bedford Falls who’s fallen on hard times and to prevent him from taking his own life.

Joseph weaves George’s life story for Clarence, regaling his childhood (Richie Lawrence) to an adult who once had a suitcase brimful of big dreams of leaving his little hometown, but got thwarted by fate in almost every aspect from having to take over his late father’s Building and Loans along with Uncle Billy (also Webster) to letting kid brother Peter (also Boyes) go to college and become a World War II hero and passing up so many opportunities, mainly to counter the underhanded schemes of miserly rich banker Mr. Potter (Diego Matamoros) in controlling Bedford Falls.

Despite having childhood sweetheart Mary (Raquel Duffy) as his devoted wife and their loving family, plus a whole townsfolk who owe him so much for making their lives better due to his generosity and selflessness on his side, George feels like the ultimate loser with nothing to show for his life and goes over the edge when Uncle Billy accidentally loses a huge loan payment to Potter that could cost them their business and his reputation. Stopping him from ending it all into an icy river, Clarence comes just in time to show George the alternative of what would have happened if he was never born to how truly successful he really is in how life’s little things are far greater than the bigger ones.

Director Albert Schultz warmly and faithfully recreates Philip Grecian’s careful adaptation (with a few tweaks here and there), who also did the same treatment for their A Christmas Carol; from the clever usage of filling in spaces that can’t be recreated onstage to the sound effects helped on by the cast with members Christef Desir and Daniel Mousseau as the soundmen, plus Lorenzo Savioni’s superb recreation of a 1940s radio studio stage design and exact period costuming and the ambient lighting of Bonnie Beecher making it all seem real.

The cast is all fantastic in their (oft-) multiple roles with Prest nicely channelling Jimmy Stewart’s champion of the people from his sweet courtship to Duffy’s Mary having decent chemistry to the distraught George who’s temporarily lost his faith in learning to regain it again. Webster’s great being Uncle Billy; Dennis as Clarence has lots of pluck and comic timing; Matamoros truly laps it up as the dirty ol’ capitalist baddie Potter; Michelle Montieth playful as town flirt Violet and child actors Lawrence and Thea Lapham are polished in their minimal if essential roles.

With musician James Smith to provide all the music, Soulpepper’s It’s A Wonderful Life is a total triumph from start to finish among other holiday fares for this season for all its frills, fun and drama that hopefully should become a annual holiday tradition, like they’ve done with Carol; in reflecting the power of community versus the malevolent forces who’d rather tear it down. Highly recommended.

It’s A Wonderful Life continues through December 31. For tickets and information, call 416-866-8666 or soulpepper.ca.