Rocking in the bosom of Ailey 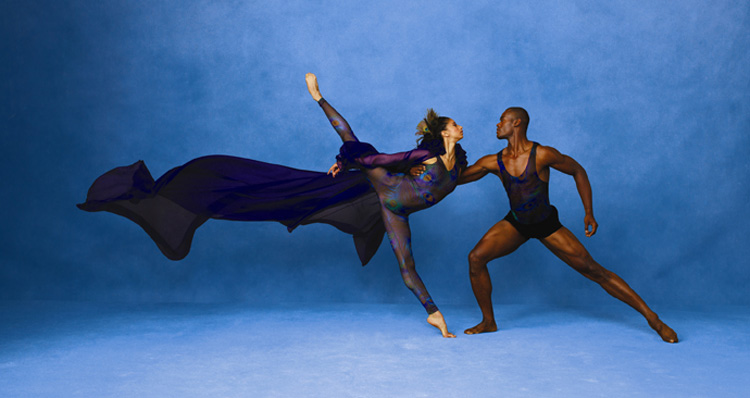 After a four-year absence from Torontonian audiences, the Alvin Ailey American Dance Theater troupe comes back to the Sony Centre for the Performing Arts (1 Front Street East) for a two-day stand starting this Friday (March 4) with a Ailey classics dusted off and given a restaging, plus a few new ones – some getting a Canadian premiere here – in continuing the legacy of its legendary founder in opening up some new frontiers for the company.

March 4th and 5th will feature the Program ‘A’ series with Toccata, a 1964 street ballet of a teeming New York day of the classical nuances of Lalo Schiffrin and bebop orchestras of Dizzy Gillespie; Ailey’s 1972 tripartite Love Songs to the music of Donny Hathaway and Nina Simone about commitment, hope and overcoming adversity and two brand new works Exodus and Open Door, where the former as choreographed by Rennie Harris tackles ignorance and conformity within society and oneself with hip-hop undertones and the latter sways to Afro-Cuban rhythms on the power of dance, inspired by choreographer Ronald K. Brown’s travels to the Caribbean island state.

The March 5th afternoon matinee-only Program ‘B’ also opens with two new productions Four Corners has four angels on each corner of the Earth holding the four winds, as done by an ensemble seek to find peace, devotion and triumph as created by Brown with the music of Carl Hancock Rux; and the taunt, cathartic ensemble number Awakening as choreographed by the troupe’s current Artistic Director Robert Battle on chaos and resolution, dissonance and harmony.

A couple of old standbys wrap it up with a Canadian-tinted remount of the 2004 duet A Case of You, choreographed by previous Artistic Director Judith Jamison to the Diana Krall cover of the Joni Mitchell chestnut about jazz women artists as inspired by the Edward Hoppers painting “Nighthawks.”

And Ailey’s 1960 gospel masterpiece Revelations to Negro spirituals to holy blues as only the company can perform it and shouldn’t be missed, period (I’ve seen it twice – take my word for it). And if that little dance number doesn’t make you want to raise – or rock – your own soul, nothing will.

The Alvin Ailey American Dance Theater company performs this Friday (March 4) at 8 p.m. and Saturday (March 5) at 2 and 8 p.m. at the Sony Centre for the Performing Arts (1 Front Street East). For tickets/information, call 1-855-872-7669 or sonycentre.ca. 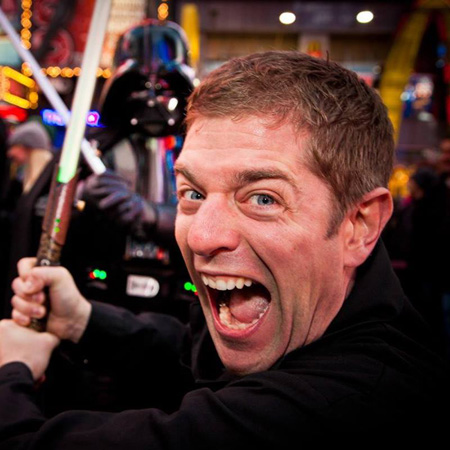 In over fifteen years, 180 cities worldwide and 1,200 performances, Victoria, B.C.-born actor/writer/comedian Charles Ross has brought his child-like parody of the George Lucas space opera One-Man Star Wars Trilogy  to stages from off-Broadway to Dubai, and even a Lucasfilm Star Wars fan convention; to packed audiences and critical acclaim. For what seems like a decade-long wait, Ross brings it back to Toronto at the Bluma Appel Theatre (27 Front Street East) for a brief run in April.

Based on the original trilogy line-up of A New Hope, The Empire Strikes Back and Return of the Jedi, it’s like watching a pubescent kid recreating key scenes from the iconic science-fiction/fantasy epic for all its glory, with a little poke here and there at its infamous wooden dialogue and colour commentaries by Ross. And with renewed interest in the Star Wars phenomenon since the third trilogy came out late last year with Star Wars – The Force Awakens, old and new fans will relive the thrill as well as the fun involved.

All crammed into a 90-minute romp through that galaxy far, far away where a young Luke Skywalker learns about his Jedi heritage, both the light and dark side of the Force; the self-centred smuggler Han Solo inadvertently finding himself engaged in a bigger cause worth fighting for and Princess Leia discovering some things other than the Rebel Alliance she never imagined for herself, all pitted against the Dark Lord of the Sith, Darth Vader and his servitude to his evil Emperor Palpatine.

Spending most of his “misspent” youth watching the films at least four hundred times, Ross almost lost his license to perform it – despite getting blessings from the Grand Jedi Master himself, Lucas, plus his chuckles over the production a few years back – before the Walt Disney Company bought the franchise in 2012 and copyright infringement hung over his head like a waiting lightsabre.

After a meeting with Lucasfilm executives prior to the takeover, Ross and fans of his take on the Lucasian universe could heave a sigh of relief in giving him official licensing to carry on in order avoiding any problems with the new owners, which he initially admitted was “a little bit terrifying.”

Even though he’s moved onto other parodying theatre projects like One-Man Lord of the Rings Trilogy and most recently his newest, One-Man The Dark Knight Trilogy – his comedic take on Christopher Nolan’s Batman saga – that he’s slowly but surely bringing it to audiences, his love for doing One-Man Star Wars Trilogy still remains his favourite, although he’s keeping it light on the road these days for obvious reasons, should Disney revoke his Jedi license. “I’m still playing it a little bit low,” Ross says. “And there’s a reason the word ‘parody’ is in the title.” 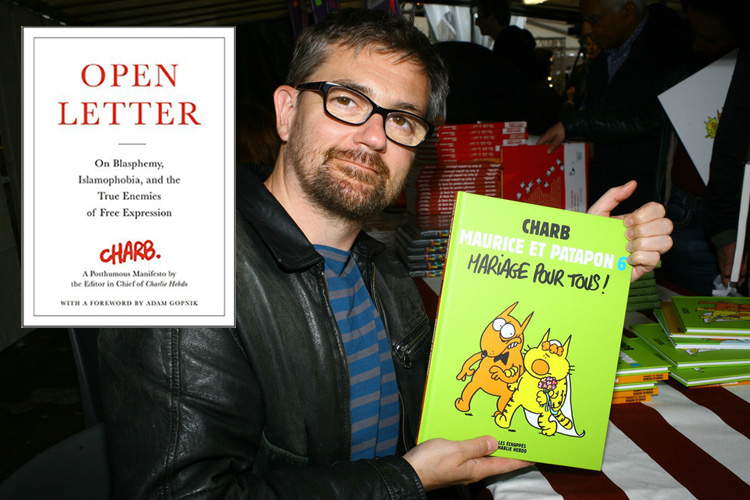 Open Letter: On Blasphemy, Islamophobia and the True Enemies of Free Expression

If there is one defining moment in recent memory about freedoms of speech and expression that were evermore under attack was the horrific Charlie Hebdo shootings in Paris, France on January 7, 2015. On that day, the popular, if controversial political lampoon publication’s offices were broken in by two gunmen brothers, Chérif and Saïd Kouachi, who were influenced by al-Qa’eda in the Arab Peninsula and massacred twelve cartoonists onsite before going on a further rampage across the French capital, hitting targets of perceived enemies of Islam and furthermore, on the ideals of a open and democratic society’s beliefs that were almost shaken to its core, even in the wake of the second attack last November by militants almost cut from the same cloth as the Charlie Hebdo gunmen.

In their bloodied retreat, survivors overheard them say: “We killed Charlie Hebdo !” in triumph in murdering its editor-in-chief and cartoonist Stéphane Charbonnier, better known by his contemporaries as “Charb,” in their belief they silenced the social critic and satirist for publishing cartoons that depicted the Prophet Muhammad in less than flattering ways. Little did they realize that Charb had completed a book two days before his untimely and violent death on his stance on social justice, censorship and standing up to the bullies of the world of all stripes in Open Letter: On Blasphemy, Islamophobia and the True Enemies of Free Expression. Just goes to show you can’t keep a good cartoonist down.

Translated from the French, this rather short book picks apart those who’d rather use threats of hate speech through legal terms to more radical methods (Charlie Hebdo’s offices got firebombed back in 2011) and defends press freedoms, even if it offends some or one person and/or group since the publication never shies away from any taboo subject or legitimate target of ridicule and most importantly, with the threat of violence.

Charb pulls no punches through his text that could be seen as now-ironic arrogance and foolhardy. But read further and you’ll see some valid points he makes, especially in how the term “Islamophobia” in use since 9/11 has been hijacked by other groups claiming to be the target of hatred, for example the Catholics through the General Alliance against Racism and for Reorganization of French and Christian Identity (AGRIF in its French acronym), who only battles discrimination against white French Christians and not the whole metropolitan French populace that includes its African, Arabic and Asian-Pacifica makeup who may (or may not) be converts.

And then there’s “Francophobia” or “republicophobia,” for simply insulting France itself from desecrating the tricolour flag or mocking the national anthem and many others too much to mention that the book gains its strengths from with logical rebuttals and in an oft-mocking tones that makes one see the ridiculousness of governmental overkill, religious intolerance and societal mores that feel not open for ridicule without prejudice or political correctness that goes too far that it needs to be laughed at every now and then.

Open Letter stand ups for minority rights and free press in layperson terms and gets to the heart of the matter in staying strong against the tide of those who rather crush dissenting voices that are vital to a functioning society. Sadly, this manifesto comes much too late to save Charb and his fellow cartoonists, but it’s not too late for us to learn from this event that one has to have a sense of humour in the face of the intolerant and narrow-minded stupidity.