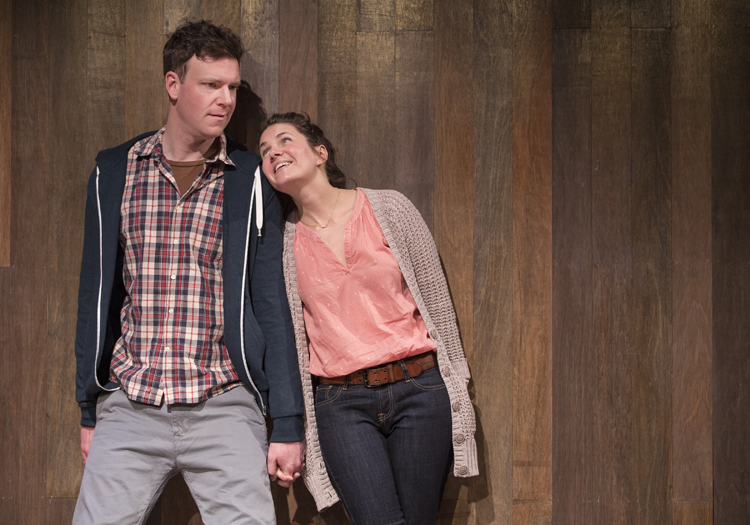 Complexity doesn’t even half describe the return engagement of the romantic comedy/drama Lungs by British playwright Duncan Macmillan who jumbles gender politics and relationship issues through blink-and-you’ll-miss moments that’s guaranteed to bring a few conversation pieces to the table after seeing it without missing a beat.

A young nameless couple (Lesley Faulkner, Brendan Gall) debate back and forth in whether or not to have a child through various points and moments in their relationship, agreeing and disagreeing, sacrifices being made to make room for another being, various concerns about the environment, falling in and out of love in building on whatever foundation they find themselves in and whether or not it’s worth staying together through the thick and thin.

Director Weyni Mengesha manages to keep an relatively steady flow in the two-person play on the aspects on handling parenthood on both sides in bitingly funny and dramatic poses in the 75 minute running time breathlessly, even if at times it tends to drag on a bit in a few places mid-way.

Faulkner and Gall reprise their Dora-nominated roles in almost breakneck speed and dialogue of a he said, she said nature in engaging banter and uncomfortable silences of the challenges they face seem almost realistic over needs and responsibilities. It may exhaust some to a degree, particular in the beginning, but at least it’s never uninteresting to watch.

Kept on a minimalist and confining venue to maintain the play’s intimacy of the everyman couple by Ken Mackenzie’s set/costume design, Kimberly Purtell’s lighting and Thomas Ryder Payne’s soundscapes, Lungs may not exactly be a perfect date-night outing choice, yet it gets to the heart of what love is.

Songs and stages smooth out winter

Huddling around fireplaces and binge-watching TV shows may not seem like such a bad idea come wintertime, but honestly, how many episodes of Mad Men and Breaking Bad can one watch between now and the first flower blossom in the spring? Toronto has plenty to keep our northern populace entertained for those who tire of the aforementioned easily and can’t afford a sunny destination to escape to.

Harbourfront Centre’s DanceWorks series continues with three programmes, Dance Ontario’s DanceWeekend (January 16-18) with a hodgepodge of companies from around the province giving a smorgasbord of dance genres by the likes of Jade’s Hip-Hop Academy Performance Company, Ovation Dance, Arte Flamenco Spanish Dance Company, Kaeja d’Dance and others, including a couple of commissions by Courtnae Bowman and Hanna Kiel; the return of acclaimed South African dancer-choreographer Vincent Sekwati Mantsoe (January 29-31) after a decade-long absence from Toronto with two new solo works NTU (Nothing) on nothingness and Skwatta about the squatter camps in his homeland and Sylvain Émard Danse’s Ce n’est pas la fin du monde for its one-night stand February 28 about adapting to the passage of time and the acceptance of its limitations.

The World Stage is back in opening up their launch party The #artlive Ball with local companies House of Nuance and House of Monroe bringing back the old school ballroom vogue dance craze of the 1980s and ‘90s January 24; Toronto’s Suburban Beast staging the once-unstageable Shelia Heti’s two dysfunctional families on permanent vacation dark musical All Our Happy Days Are Stupid (February 11-14); British theatre provocateurs Stan’s Café puts on the non-puppet show The Cardinals about a trio of near-mute cardinals performing their abbreviated version of the bible, as assisted by their young Muslim woman stage manager as a meditation on interfaith cooperation (February 12-15) to the award-winning Geoff Sobelle and his one-man show The Object Lesson (February 18-22) mixing magic and artifacts about memory, life and love.

On the cultural sideline and for free, KUUMBA celebrates twenty years at Harbourfront February 6 to 8 with the theme of Afrofuturism, a blend of science-fiction, historical fiction, magic realism and technoculture through the African diasporic lens for African Heritage Month and the LunarFest (February 28-March 1) for performances, culinary arts, crafts, games and a lantern installation marking the Asian Lunar New Year of the Ram.

Further on theatre, The Theatre Centre (1115 Queen Street West) brings a new play by Andrew Kushnir, Small Axe, the hidden stage stories of the Jamaican and Jamaican-Canadian LGBT as told by a white documentary theatre-maker investigating homophobia and homophobic violence and a journey of self-exploration, partnered with Black CAP and Project: Humanity January 17 to February 1.

Soulpepper Theatre starts their 2015 season with Nobel Prize-winning Dario Fo’s Accidental Death of an Anarchist (January 29-February 21) inspired by the Piazza Fontana bombing in 1969 Milan as a madcap political satire on the consequences of extremism and the generational comedy-drama The Dining Room (February 5-March 10) by A.R. Gurney about events around a family dining table.

Long, long before South Park and The Book of Mormon made him a mover and shaker on the American entertainment world with Matt Stone, Trey Parker wrote, directed, produced and starred in the cult independent film Cannibal! The Musical during his University of Colorado days in 1993. Twenty-two years later, it’s getting its world premiere stage adaptation at the Panasonic Theatre (651 Yonge Street) February 10 to March 8 by Christopher Bond and Trevor Martin, the Torontonian team that gave the world Evil Dead the Musical.

Elicia MacKenzie and Liam Tobin prepare to saddle up for the world premiere professional staging of the dark comedy Western musical Cannibal! The Musical come February 10 for a limited engagement at the Panasonic Theatre.

Based on the real-life events surrounding five miners lost in a Utah Rockies snowstorm in 1874 and Alfred “Alferd” Packer who was (and still the only American in their history) convicted of cannibalism. Joining the cast of Cannibal! is The Sound of Music’s Elicia MacKenzie, Triple Sensation’s Liam Tobin and Second City alumni Mike “Nug” Nahrgang, Marty Adams and Trevor Martin singing Parker and Stone’s original show tunes along with five newly-composed songs by Bond and Martin.

Canadian Stage has Anton Chekov’s timeless masterpiece The Seagull (January 11-February 8) and The Other Place (January 18-February 8), a psychological dramedy about a neuroscientist’s mental breakdown after her nuclear family collapses along with her own physical health; Ken Gass’ Canadian Rep Theatre presents the Toronto premiere of Florence Gibson MacDonald’s How Do I Love Thee? February 5 to 22 on the ups and downs of the celebrity marriage of poets Elizabeth Barrett Browning and Robert Browning and the inaugural PROGRESS Festival by SummerWorks February 4 to 15, featuring Marathon(February 4-6), a dance theatrical of contemporary Israeli society, The Messiah Complex 5.0 (February 5) exploring religious evolution from a gay perspective, the North American premiere of Tunisian play D-Sisyphe (décisif) (February 6-7) on the cause and effect of the Arab Spring on the Arab World on a unloved Tunisian construction worker and bilingual productions of Margarete (February 12-15) done in Polish and English about lost and found, memory and the fading art of silent film by Janek Turkowski, a Brazilian Portuguese version of Daniel MacIvor’s Cine Monster (February 12-14) and the eight-hour Silent Dinner as performed in English and American Sign Language by deaf and hearing performers and non-performers making and eating dinner in complete silence (a post-performance invite for dessert/discussion with the cast follows).

And two music festivals play out during the Ontarian Family Day Long Weekend: the 15th Wavelength Music Festival showcasing the local indie band scene throughout the city’s west end venues and Winterfolk XIII Blues and Roots Festival takes over the Danforth of ticketed and free concerts, both running February 13 to 15.