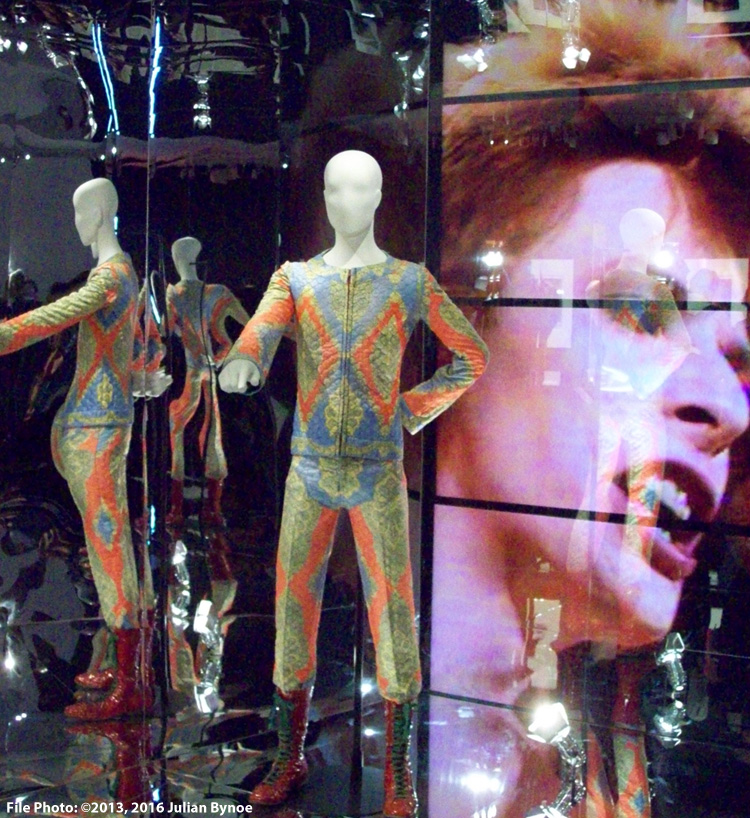 “Something happened on the day he died/Spirit rose a metre and stepped aside/Somebody else took his place, and bravely cried (I’m a blackstar, I’m a blackstar)” - David Bowie, “Blackstar”

In remembrance of rock music’s first chameleon, I took this photo a couple of years ago at the Art Gallery of Ontario’s David Bowie is… exhibit of his archival paraphernalia for a review I did for the now-defunct Outreach Connection. R.I.P. to the Thin White Duke/Major Tom/Starman/Ziggy Stardust. (Didn’t I say he was a chameleon?) 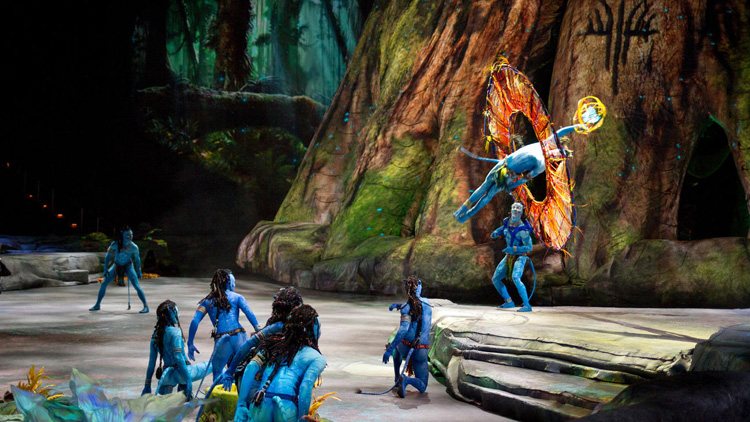 Adapting a well-known film for the stage is nothing new and in the past couple of decades it has been the staple for contemporary theatre especially on Broadway; sometimes succeeding, sometimes not. For Cirque du Soleil in attempting to cross into that field with James Cameron’s science-fiction/adventure Avatar that is – or was, until very recently (by a certain film that shall remain nameless) – the highest-grossing film of all time, they’ve expand his universe further with TUROK – The First Flight with honorable caliber into an actual theatrical experience that enthralls.

Created and directed by Michel Lemieux and Victor Pilon (DELIRIUM), it begins on the Na’vi homeworld of Pandora with The Storyteller (Raymond O’Neill) narrating about an event that took place three thousand years before the events of Avatar of two young teen Na’vi warriors Ralu (Jeremiah Hugues) and Entu (Daniel Crispin), who upon their initiation ceremony with the Omatocaya Clan is interrupted by a earthquake and a horrifying vision from their Shaman (Priscilla Le Foll) who fears their sacred Tree of Souls is endangered by a volcanic eruption that will break their link to their creator Eywa if nothing is done to prevent its destruction.

Looking for Entu who had failed his initiation with embarrassment, Ralu finds him searching for solace under the Tree of Voices and are guided by their ancestors’ spirits that only Turok, the feared aerial predator leonopteryx; will help them save the Tree of Souls by gathering five sacred objects. Joining them on this perilous journey is the equally brave Tsyal (Zoe Sabattie) in fighting off Pandora’s other beasts and convincing sceptical clans in assisting the three youngsters on their task before their very world and existence is doomed.

Admittedly, it does take up a slow build to start out but by the middle of the first act it truly does take off on its own and the action picks up with the show’s two-and-a-half hour narrative and never stops, all pumped up by Bob & Bill’s exuberant score (please click here for album review) and Alain Lorte’s lighting designs on Cal Fillion’s set. TUROK is a production that stands out from anything from out of their repertoire in Cirque’s thirty-two year history by reducing their usual acrobatic standbys and relies mostly on the cast to bring the story to life, as well as the stunningly breathtaking visuals that Lemieux and Pilon are best known for, including the gorgeous costuming and makeup by Kym Barrett.

Of course, the famous acrobatics are not completely banished. They’ve got their basic aerial ropes, percussion ensemble bar, motorized Chinese poles and the amazing puppetry of Patrick Martel here, but new stuff includes the hoop jump, the graceful balletic kite manipulation, a balancing skeletal structure act and a swirling dance-like and colourful aerial flowers segment, all adding to the show’s wonderment up to the dramatic climax. And no clown acts either, but it works out for the better in the storyline since they’re truly not needed in this particular case.

TUROK – The First Flight breaks a new ground for Cirque by not only recapturing some of the thrills from Avatar, but also in stepping out from their comfort zone into something incredibly challenging, different and invigorating that they haven’t truly lost their taste for adventure and innovation as this show brings.

Compacted in under 48 minutes, co-producers/composers Bob & Bill (Guy Dubuc and Marc Lessard) manage to cram plenty of emotion into the soundtrack for Cirque du Soleil’s Avatar-based production TORUK – The First Flight to slip alongside the late James Horner’s original film score with ease in the show’s pace of all of its choral, tribal, nature sounds and other world music rhythms, including some of their signature touches all over their tracks.

“Omaticaya Clan” and “Luminous Reunion” have those haunting, visceral characters for the opening and closing numbers respectively; a heavy percussion lords over “Hallelujah Mountains” while a trippy underpinning takes over “Tawkami Clan” and Salif Sissokho lays out the drama behind “Viperwolves and the Tipani Clan.”

Playfulness sticks heavily around “Lu’aw Na’vi” and “Direhorses,” whereas the best track goes to “The Anurai Clan Sanctuary,” mainly for Bob & Bill paying tribute to the classic roots of early Cirque soundtracks with the avant-garde operatic overtures heard, as mainly sung by lead vocalist Cumie Dumo and the show’s touring vocalist Isabella Corradi to add those guttural gravitas throughout. Enough to sate both old and new fans of Cirque soundtracks and highly reminiscent of 2006’s KÀ soundtrack, the composition do the show and songbook justice.

For more that a decade-and-a-half, the Wavelength Music Festival has given the spotlight on national talent that would otherwise be overlooked by the indie music crowd and industry. For its sixteenth incarnation, fest organizers have now announced its current lineup for the three-day bash next month (February 12 to 14) mainly at The Garrison (1197 Dundas Street West) and a one-day pop-up venue at Markham House City Building Lab (610 Markham Street).

More than just a musical showcase, Wavelength will get things started with a pop-up gallery exhibit at Markham House, Wavelength: #ICYMI (January 14-February 14) with concert photos, posters and festival art at the venue and will host a series of free lectures on Sunday afternoons with Beliefs & Nailbiter’s Josh Korody on a modular synthesis and guitar sounds workshop (January 17) and a panel discussion of the local indie music scene “What Makes a Music City?” (January 31).