After his sleeper hit The Visit brought back his creditability as a filmmaker to the critics and cinephiles alike in 2015, M. Night Shyamalan unleashes his sharpest psychological thriller to date, Split , as a terse and chilling tale of abduction that’s already in my book one of this year’s best films so far.

In a Philadelphia mall parking lot in coming home from a birthday party, three teenaged girls Casey Cooke (Taylor-Joy), Claire Benoit (Haley Lu Richardson) and Marcia (Sula) get kidnapped by a Kevin Wendell Crumb (McAvoy) after subduing Claire’s father and locks them up in a hidden room with no sense of purpose to what his intentions are.

They find out this is no ordinary kidnapper, as their abductor tends to shift into many differing personalities ranging from a nine-year old boyish “Hedwig,” a maternal British cross-dressing “Patricia,” sex addict “Dennis” to the central aggressive figure “Dennis” from time to time, depending on the mood and situation. As Claire and Marcia try to devise plans for escape, Casey, the moody outsider; tries to use her mental survival skills she learned when she was younger (Izzie Coffey) to outwit Kevin’s psycho games.

Meanwhile, Kevin tends to make frequent visits to his noted psychologist Karen Fletcher (Buckley) as the fashion-conscious gay hipster personality “Barry,” who has managed to narrow down his multiple split personalities to twenty-four with a growing concern over her patient with an emerging new personality he calls “The Beast,” a malevolent superhuman being looking to sate his appetite on those he describes as “the impure” that might become the most dangerous one of them all.

Shyamalan channels both Alfred Hitchcock and Brian De Palma into his script and pacing courtesy of Mike Gioulakis’ cinematography and West Dylan Thordson’s edgy-inducing score throughout the film – plus allowing himself a chuckle of a cameo as a eunuch in one scene – and explores the human subconscious and split personality disorder that probably will make mental health advocates cringe, but at least there’s some intelligence behind his dialogue and characters.

McAvoy is, without a doubt, engagingly creepy in his best role since The Last King of Scotland in inhabiting all these personalities and how Kevin interacts with his victims and the outside world (his tête-à-têtes with the naïve Buckley are some of the best moments) that could make fellow counterparts Norman Bates and Hannibal Lecter shake in their boots.

And while the other cast members do equally well, Taylor-Joy is exceptionally good as the semi-gothic young heroine, with a darkened past in her flashbacks involving her father (Sebastian Arcelus) and an uncle (Brad William Henke) of a questionable nature; but never take her for a helpless victim as it will help her through her unimaginable ordeal she brings with realistic weight and grit.

Accompanied with a great surprise in the epilogue, Split shows a new level of creative maturity for Shyamalan’s work while delving a little bit into his earlier masterpieces infused here as he can truly chalk up this film as one of his career best, as well as for his two leads.

A new theatrical nest out in Toronto’s east end 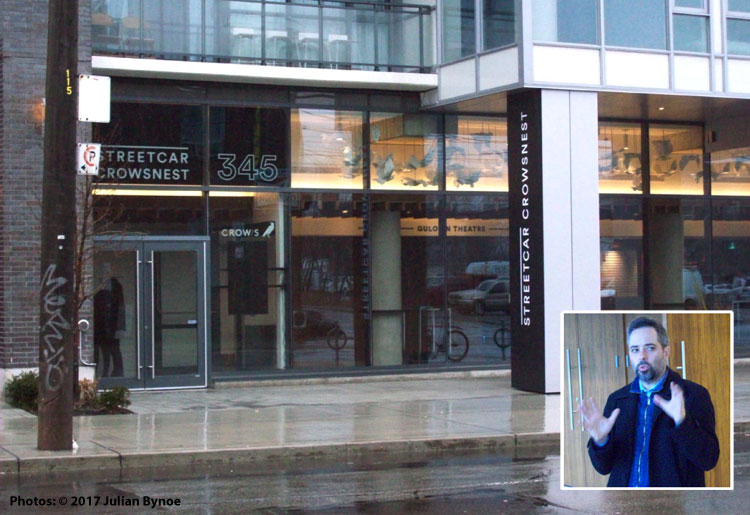 Putting a theatre within a condominium complex may seem like a highly unorthodox idea, however this may be the wave of the future for small independent theatre to survive as veteran company Crow’s Theatre opens the city’s newest stage venue, Streetcar Crowsnest, that not only boasts a main and secondary stage space but as well as a working bar and a haute cuisine restaurant to open later this spring.

“The idea for this place took shape about six years ago,” said company Artistic Director Chris Abrahams, who’s been the Artistic Director for the last ten years of the company’s thirty-four year history that started in 1983. “We saw this huge opportunity in the east end for a cultural organization, as specifically at a certain point we saw this street corner of the Dundas-Carlaw corridor, which is ideal. 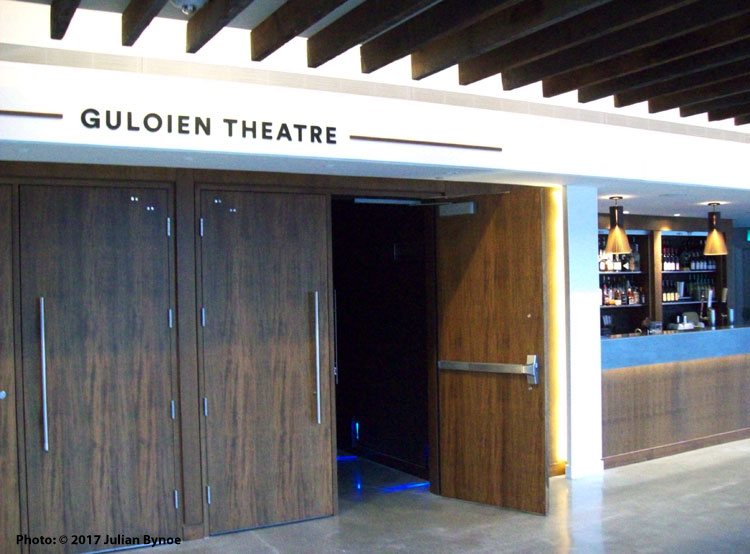 Crow’s Theatre Streetcar Crowsnest’s main stage The Guloien Theatre can hold up to 200 patrons in its flexible space area.

“This is such a great place,” he continued in reference to its location as “this part is special because it has this (Dundas) artery that goes to the downtown core and Carlaw down to the lakeshore, so it cuts through all these neighbourhoods down in the east end. It has been challenging to activate the nightlife around in the east end, although since we started this vision six years ago a number of things have already happened, like the resurgence of the Danforth Music Hall, the Opera House (nightclub) is still here and the Broadview Hotel is going to reopen in the spring and a there’s lot of historical buildings around here.”

The building for where the Streetcar Crowsnest resides is a unique partnership with major Toronto builder Streetcar Developments, hence the name portmanteau; and thanks to city Councillor Paula Fletcher came up with the idea of having a theatre on the ground floor of a condo, which began construction in 2016 and designed by DTAH Architects under principal architect Joe Lobko, who also worked on the Wychwood Barns and Evergreen Brickworks in the Don Valley area.

Left-right: Guloien Theatre’s licensed bar stocks not only fine liquers, but also two of Abrahams’ Dora Awards on display near the vintage bottles, among his many accolades as a dramatug.

“I think we hope to be at the crest of the wave of so many things happening here in the east end and also just as a company, as we’ve been wanting to offer some of the state-of-the-art performance space in this part of the city,” stated Abrahams. “We’ve got lots of theatres, but we’ve spent the last three or four years at the Canadian Stage Berkeley Street Theatre as a resident company, so we’re thrilled to have to have a room of our own so we’ve got to be in a position to welcome other dramatic organizations across the city to come do their work at our theatres and meet our neighbours.”

Left-right: Guloien Theatre’s interior within its setting and with the lights up with the cast of The Wedding Party taking questions after a dress rehearsal from the media.

For its first show in its new digs currently running is the comedic The Wedding Party by award-winning playwright Kristen Thomson; whom Abrahams had worked in the past with on her breakout production I, Claudia in 2007, 2009’s The Patient Hour at the Tarragon Theatre and Someone Else in 2013 at Berkeley Street Theatre. The modular Guloien Theatre shell, that can hold about 200 persons and alter its configuration, has a quiet little ambience despite its compacted sizing – about three storeys up into the condo space or 8.2 x 7 metres (27x23 feet) – with relatively decent acoustics and a letterbox high-ceiling.

“We really wanted to create this great playground for artists to able to experiment and create different relationships with the public,” Abrahams explained in the development of the main stage theatre. “I think one of the great things about this space is has this scale, this height in which it varies and I think, you know, when there’s a temptation to stay at home and stay locked into our own devices, one of the great things that we can do in theatre, and the storefront space has proved, is that audiences love to get close to the performance, they love to smell the actors. And that’s one of the great highlighting liveliness that we can do as a theatre culture to encourage warm participation, people to take risks and walk in the door and see what theatre actually is.”

The Community Studio space at Streetcar Crowsnest from the outside and inside, awaits to serve smaller theatre troupes and community events, private and corporate.

Its lobby area makes good usage of woods, steel and concrete to be more inviting to theatregoers, with a couple of reminders of their avian namesake in particular to a bronze crow statuette sitting near the bar tip jar and the papier-mâché -type ceiling sculptures near the storefront window area, “A Flock of Influence” by local artisan Jacob Yerex and tucked away near the main entrance is the Scotiabank Community Studio space that will host theatre, personal and corporate events and the capacity of 100 patrons, as well as a teaching area for youth theatre classes by the company in order to show its engagement and commitment to the community at large.

The brasserie -style restaurant with soundproof walls that won’t disturb the theatre (and vice versa) is to be called Gare de l’Est (Eastern Station) operated by Montréal restaurateurs Erik Joyal and John Sinopoli behind the Torontonian eateries Table 17, Ascari Enoteca and Hi-Lo Bar, is set to open in March with their own little bar for pre- and/or post-show fares including a signature French onion soup on the menu, which Abraham heaped praise on it as “very cool.” 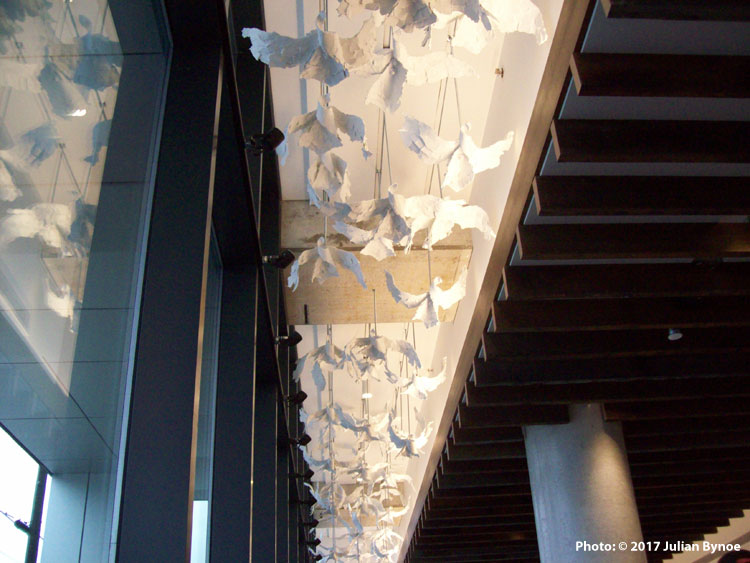 Ceiling sculptures at the storefront window area, “A Flock of Influence” by Toronto sculptor Jacob Yerex, goes with the namesake of Streetcar Crowsnest.

“We have this great feeling that east-enders have already, after three or four performances; we know that the east end is going to be here for us. I know that they’re excited as they keep telling us how excited they are of us being here. And I think someone had asked me what the definition of success is to our company: three or four years from now, will be that all companies from around the city will want to work here, not because of our really beautiful space here – we got a lobby, we got a bar and that’s cool – but because our audience is fantastic and adventurous, a little bit younger and upright. That is the greatest asset of any artistic-run organization in the quality and character and loyalty of this audience. That is my dream, is to build this audience with culture out here in the east end.”