George Lucas doesn’t dabble into animation that often (good luck in trying to find the rarely-seen 1983 cult classic Twice Upon A Time), so through his Lucasfilm Animation division comes his version of Shakespeare’s A Midsummer Night’s Dream he was tinkering with over the last fifteen years into the jukebox musical-comedy Strange Magic that provides a unconventional love story that’s more or less uneven.

Hoping that his daughter will change her mind on marrying her narcissist and ambitious ex-beau, the Fairy King (Alfred Molina) holds a ball to patch things up while keeping an eye on his flirty younger daughter Dawn (Meredith Anne Bull). Unsuccessful on both camps, Roland schemes on getting back into Marianne’s good graces by rescuing the Sugar Plum Fairy (Chenoweth), imprisoned by the Bog King years ago; by manipulating the elf Sunny (Elijah Kelley) into getting her to make up a potent love potion. And since Sunny is secretly lovesick over Dawn, he hopes he can benefit from it too.

Through a series of harried escapades in the Dark Forest, the elf manages to get the potion making the Bog King go into a flying rage and ends up kidnapping Sunny in exchange for the potion so he can destroy it that could send both sides to war, provided that certain mishaps and unexpected turns along the way can prevent it from happening.

Admittedly, the film has a pretty good premise, what with the brilliant and eye-catching animation designs, the minimal comedic moments stand out okay and the vocal talents here are alright under the direction of Academy Award-winning director Gary Rydstrom. It’s just that the usage of classic and current pop and rock songs of the last 60 years from Elvis Presley to Beyoncé tend to get overblown in certain scenes and tiresome in others after a while (how many times can one listen to “I Can't Help Myself” and “Can’t Help Falling in Love” in one film?). Even the Shrek and Happy Feet franchises handled this with more grace, if screenwriters Rydstrom, Irene Mecchi and David Berenbaum didn’t keep adding more to the script than was already needed, although the underlying parable about attaining true love and conventions on beauty being skin deep are its only stable cornerstones.

Wood does a good turn as a scorned heroine out to save her sister and go mano a mano against Cumming’s tormented ruler out to outlaw love in all respects and discovering how emotionally scarred their souls are. Maya Rudolph is a laugh as one of the comic reliefs being the Bog King’s matchmaking mother who hasn’t lost hope on her son and strange that Molina’s Fairy King looks a bit like Lucas himself (wink-wink), not to mention the only charming character that cuts close to endearing is that impish possum-rat creature being the Puck-like figure and unlikely ally.

Modestly entertaining, Strange Magic isn’t wholly bad a romantic-adventure fantasy if only it didn’t go overboard on the musical part. It’s nicely made on the surface, but it should have heeded its own message about inner beauty.

Just because two individuals come from the same type of community doesn’t always mean the experience(s) will be similar or that it needs salvation as views in the documentary-theatre piece Small Axe on one gay man’s quest to understand the LGBT communities of Jamaica and their diaspora, homophobia and cultural stereotypes being brought to the forefront as much as it does about one’s self-discovery at their own unforeseen expense.

Upon scaffolding platforms are five individuals (Sarah Afful, Michael Blake, Lisa Codrington, Chy Spain, Marcel Stewart) representing the vocal multitudes of the LGBT communities of Jamaicans and Jamaican-Canadians from all walks of life bringing their stories to an Canadian interviewer (Andrew Kushnir) of Ukrainian descent and openly gay, all telling tales of sexual awareness, denial, acceptance within themselves and their families (some with shocked surprise) and mostly rejection through quiet shunning to violent, even murderous confrontations with little or no sympathy from the authorities.

The interviewer, also weaving his own story about being gay in Canada and prejudices from his own community, questions not only the arrows and slings suffered by his Jamaican counterparts, he examines his own motives behind his pet project. Is he a documentarian chasing after a vague, unreported topic on four hundred years of colonial and religious repression, slavery’s legacy and race – or just a privileged “knight’ looking to be the next Great White Hope?

Actor/writer Kushnir engages this under 90 minutes with tremendous courage and synergy of all the fighting social questions involved as director Alan Dilworth handles his cast and flow with a sense of direct boldness and fluidity to allow them to be comfortable in their own voices – well managed by dialect coaches Laurel Paetz and Liza Paul – and positioning on Jung-Hye Kim’s construction-like set and synchronized spotlighting by Kimberly Purtell.

Small Axe doesn’t propose to have all the answers to universal homophobia (and nor should it) in trying to unravel centuries of institutionalized racism and heterosexism from both sides and inner wars that consumes oneself. Loaded with thoughtful recourse, its message is as clear as one interviewee puts it: “If you [try to] simplify it, you’ll never get to the heart of it.”

Small Axe runs through February 1. For tickets/information: call 416-538-0988 or theatrecentre.org. 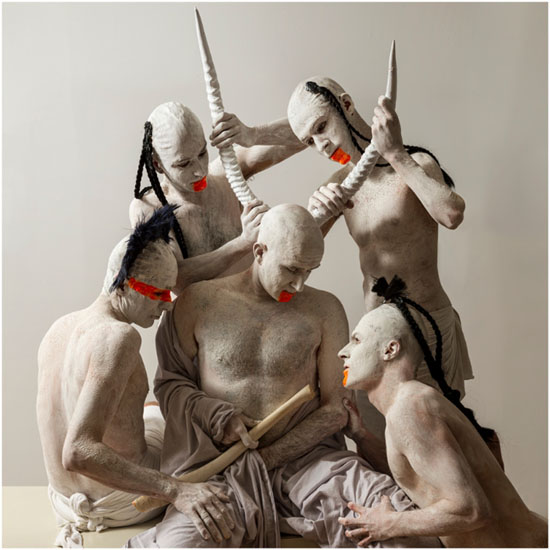 Religion gets a revision in the daring The Messiah Complex 5.0, making its world premiere at the first Progress Festival this February.

Never can there be enough theatre festivals in the wintertime to combat cabin fever when its conceived by the popular SummerWorks Festival with an international cavalcade for the very first Progress starting next month (February 4 to 15) with more than just six productions done in six languages for basic consumption, as spearheaded by festival Artistic Producer Michael Rubenfeld; but also as a forum about the art of theatre language with five free artists’ workshops and talks thrown in.

“I’m incredibly excited and proud of how many different companies have come together to make this happen,” said Rubenfeld. “Progress is bringing together a series of essential conversations being had by some of our city’s vital thought-leaders in performance. This is a festival lead by a collective desire to collaborate in how we think about performance in Toronto and the result is a staggeringly unique and diverse program of work.”

All taking place at the Theatre Centre (1115 Queen Street West), a couple of auspiciously topical shows take root with the documentary-style reading of Novorossiya: No One’s Land (February 14) based on the real-life experiences of Ukrainian theatre director Pavel Yurov on his being held hostage by pro-Russian separatists during the breakout of the ongoing crisis last April and was imprisoned and tortured for more than two months on accusations of being a Ukraine spy and the issues of how civility gets lost amongst those who were once neighbours in the name of nationalism.

Combining text, dance and theatre, the North American English-language debut of Marathon (February 4-6) takes a hard stance on the consciousness of modern-day Israel by three dancers running dangerously close together on the varying issues grapping the country from secularism versus orthodox Judaism to the Palestinian question and the role they have in the Middle East in its current grappling with the Arab Spring and whatever the future it will leave for its own survival from outer and inner conflicts, plus their freebie performance Dance as Metaphor, Language and Lens (February 7).

Performance-lecture The Messiah Complex 5.0 (February 5) uses the Harlow experiments – a psychological study on infant relationships replacing newborn monkeys’ mothers with fabric-and-wire surrogates – to explore the concept of religious evolution from a gay perspective, as created by multimedia artist Michael Dudeck, looking to challenge and question it meaning, as much as it looks to provoke.

Another Middle-Eastern story surrounding the Arab Spring and its offshoots is the Tunisian play D-Sisyphe (décisif) (February 6-7) created and performed by Meher Awachri about a construction worker spending the night at a construction site pondering over the meaning of his own life, feeling dejected by his own family, society in general and even from God. Through dance and spoken word, based on the Greek myth of Sisyphus.

Left-right: Janek Turkowski’s Margarete examines memory through silent film and the art of conversation gets put on mute over the marathon play Silent Dinner.

Memory fuels the Polish play Margarete (February 12-15) done in Polish and English about lost and found, memory and the fading art of silent film by Janek Turkowski in an intimate setting over tea or coffee with the artist showing 8 mm films he discovered at a Berlin outdoor marketplace; a Brazilian Portuguese version of Daniel MacIvor’s Cine Monster (February 12-14), as performed by Enrique Diaz in various roles from a young boy telling the horror tale of his slain father by a neighbour to a quarrelling couple to a filmmaker still looking to complete his epic masterpiece in interconnected ways to each other and the eight-hour Silent Dinner from Ireland performed in English and American Sign Language by deaf and hearing performers and non-performers making and eating dinner in complete silence with a post-performance invite for dessert/discussion with the cast following afterwards.

And the festival talkbacks/workshops Make. Make Public. (February 8) about dance productions and the creative process as curated by Dancemakers, two-day dance workshops Intelligent Body (February 6-7) and Seeing Through Movement (February 9-10) with Marathon choreographer Aharona Israel on the physicality and dance in theatre and the symposium Dramatic Action – The Republic of Inclusion (February 15) brings the National Arts Centre English Theatre’s Alex Bulmer and Sarah Garton Stanley opening the floor on the future of theatre and its inclusiveness with society for theatre makers and aficionados welcome to join the conversation.

Tickets are now on sale (some events are free); Intelligent Body/Seeing Through Movement workshops require $50 registration fee/each. For information: call 416-538-0988 or thisisprogress.ca.