The Secret Life of Pets (Universal)

Looking to move away from the Despicable Me franchise they’ve created for themselves, Illumination Entertainment breaks the mould with the adventure-comedy, The Secret Life of Pets that’s enough to give Pixar and Disney a run for their money with the same level of sharp and character-driven writing, not to mention throwing down the gauntlet at those animated powerhouses for coming up with a funnily entertaining and original film, plus getting into the shorts category (more on that later).

A Jack Russell terrier named Max (C.K.) lives quite happily with his human Katie (Ellie Kemper) in a New York City apartment building along with his fellow pet pals, portly feline Chloe (Lake Bell), dachshund Buddy (Hannibal Buress), Mel the pug (Bobby Moynihan) and the pampered Pomeranian Gidget (Slate) with a secret crush on Max; who clandestinely engage in human-like behaviour much like their owners behind closed doors during daylight hours.

Max’s idyllic life gets turned around when Katie comes home one night with Duke (Stonestreet), a huge, slovenly mongrel from the streets who’s cramping up his domain and it becomes a territorial dispute between them on who’ll be the alpha canine. During a routine walk to a dog park, Duke drags the conflict and Max into the backstreets of Manhattan, losing their collars to feral alley cats and gets into all sorts of misadventures; including a fateful encounter to a underground world of abandoned pets, led by the psychotic revolutionary rabbit Snowball (Hart) plotting the downfall of humanity.

Discovering that Max and Duke haven’t returned back with their dog walker, Gidget gathers up their friends that include the hunting hawk Tiberius (Albert Brooks) and a crusty elderly, wheel-chaired basset hound Pops (Dana Carvey) to scour New York high and low before all their humans return at dusk. As the two canines try to survive the unfamiliar inner-city environs and escape Snowball’s obsessive wrath, they slowly rely on each other in order to find the way back home.

The filmmakers hit a sweet spot with the basic animal zaniness – and there’s plenty of it – as one would expect from a film like this, yet produce a lesson about respect and loyalty that has to be earned through the colourful animation and situations created, as well as some funny moments from a dead-on lampoon of YouTube cat video antics with Chloe; Max and Duke blissfully lost within a musical-fantasy dream sequence in a sausage factory involving Grease ’s “We Go Together” to the metal head-banging poodle Leonard who deserves his own short on its DVD/Blu-Ray/digital download release.

C.K. offers a centered, down-home feel to Max having to learn how to share living space and Katie’s heart; Stonestreet’s lonely Duke has a sense of wanting to belong somewhere; Bell giving a self-centered, if conscience-conflicted performance out of Chloe and Slate’s delightful mixture of sheltered naïveté, unrequited love and determination, but Hart clearly nails it as the bitter ex-magician’s rabbit with a destructive madness streak and oddball mood swings who makes Batman’s Joker look like Ronald McDonald, only fluffier and funnier. 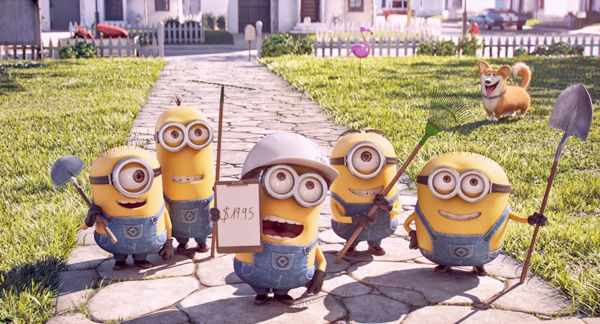 Moments of tenderness will tug on the kids’ and adults’ heartstrings who will highly enjoy The Secret Life of Pets, as much it will with the subtle (and not-so subtle) physical humour and for those looking for a respite from a certain cartoon fish dominating the summer family box office. Preceding short Mower Minions has the kooky yellow Despicable Me clowns engaged in Keystone Kops-like silliness as they start their own lawn maintenance services to a retirement home in order to buy a banana blender. Fairly predictable slapstick laughs ensure, but at least it’s pretty hilarious.

Renaissance man entertainer Steve Martin discusses about his curator project at the Art Gallery of Ontario, The Idea of North: The Paintings of Lawren Harris

Many know him from his “wild and crazy guy” days on the stand-up circuit from the 1970s and madcap comedies of the 1980s like The Man with Two Brains, Dead Men Don’t Wear Plaid and All of Me before graduating to the more smarter, sensible fares of Pennies from Heaven (a rare dramatic turn), Roxanne, Planes, Trains and Automobiles and Bowfinger.

Few know him as a magician, playwright, author and bluegrass musician, but just perhaps a handful knows about Steve Martin being a fine art aficionado with his own collection of paintings. Now he shares this passion over Group of Seven member Lawren Harris in his first – and as he vows, his only – curatorial touring art show, The Idea of North at the Art Gallery of Ontario after successful American stops in Los Angeles and Boston.

Sitting down for a media conference late last month in the AGO with Fredrik S. Eaton Curator of Canadian Art Andrew Hunter, for whom he developed The Idea of North with for three years; at the gallery’s Baillie Court space as a extension of the previous talk he gave at Roy Thomson Hall on June 22, Martin discussed on how different and political the Toronto viewing is from the shows seen in the United States.

“The idea of the show was to present Lawren Harris [to American audiences]. I’m a fan of his work and the opportunity came up and I’ve never curated before and I’ll never do it again, not because I didn’t have a great time [doing it], because nobody needs me,” he quipped. “There are many great curators, but Lawren Harris and America was a very special case. Because I loved his work, like I was the only person that knew of him and I was really excited in bringing this body of work to America. It was very successful and I was just thinking that in Boston, people came in throngs to see the show. There was great talk and great press coverage and great attendance. And there were great book sales!”

Martin never doubted for a moment that The Idea of North would be a success despite the fact that Harris, considered a national treasure up here was a relative unknown to his fellow patriots in the States unlike their other contemporary painters they’re produced, like Louise Bourgeois, Larry Zox or Jackson Pollock; and the prospect of next generations viewers and artists to feel the impact of his work. “I have an artist friend, Eric Fisshel, and he was talking about something else of late and said ‘Different art forms respond in different time frames to events.’

“For example, 9/11,” he opined; “a lot of essays were written (and) photographs, but the art world is still yet responding [to it]. Like art works about Hiroshima (atomic bombing) came way after the event and it takes time to absorb. But it takes time for the artist to absorb for what they’ve seen, young artists I’m talking about; it takes time to absorb it, to analyse it and regurgitate it into some kind of new forms, so that’s yet to be seen.”

Martin’s first encounter with Harris’ work came from a book for which he initially mistook for a Hilma af Klint painting. After meeting with noted Toronto art collector Kim Thompson, who had access to some of the AGO’s collection whilst under its huge renovation a few years back in a storage room where he got the feeling “of being jealous and awestruck at the same time”; that he became more acquainted with and has two small Harris works in his own personal collection. “Slowly, as I pursued to who he was and seeing pictures of his, I thought: ‘You know what? I discovered this guy!’ But I was disappointed to learn that he was already completely famous in Canada.” 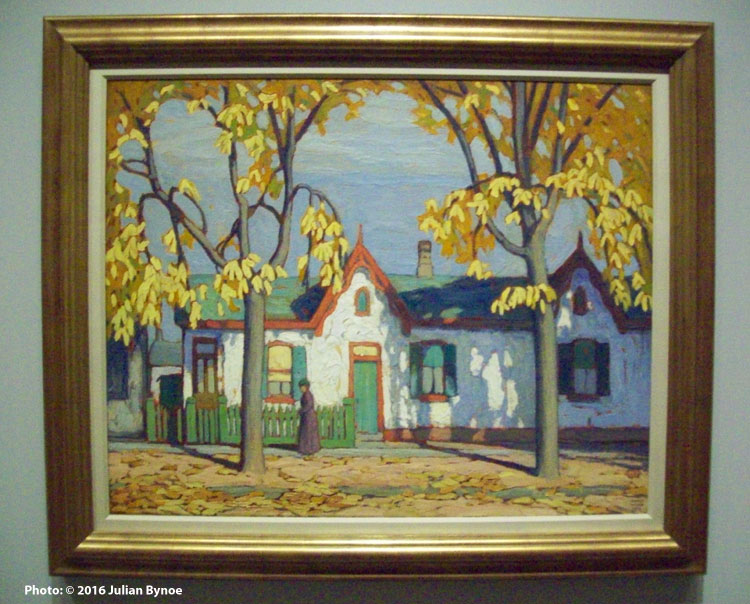 One of the many paintings Group of Seven giant Lawren Harris created in his Toronto series “Houses, St. Patrick Street” in 1922, presented in part by Steve Martin for his curated show The Idea of North now showing at the AGO.

He also discussed the complexity of how laying out an exhibit for one such as Harris can bring an unexpected perspective of the work and artist himself with a relatively serious face. “When you’re going to do an important show of an artist, what you don’t know is how [the artwork is] all going to look together, will it be impactful as you think it is? Because there might be some weaker paintings or stronger pictures, or was there enough (works) and absolutely there was. And this show had had this incredible force when you saw all the paintings together, it’s not like seeing one alone, it’s like a very different experience.

“And also hung here is, you know, there’s these little panels that Harris painted,” Martin continued. “They’re referred to as sketches, but I think we’ve understood that they’re way more than sketches; they’re very finished paintings there in many, many cases. And here most of them are all hung in one room and you really get the feeling that you understand how important these little panels are to his body of work.”

Another revelation Martin points out in The Idea of North are the other ranges of colours Harris used other than the basic whites and blues that most Canadians and Group of Seven fans associate with. “We’ve finally understood like that painting of Pic (Island), the island was actually purple. It took a while to see that,” he chuckled in retrospect, “it just looked dark.”

Hunter asked Martin whether he personally wished that Harris did continue these particular landscape paintings into his later life, but he dismissed this notion completely, “because that’s what an artist has to do. I mean, he painted in this style, what I’m talking about the artic and Rocky Mountains and Lake Superior style; for fifteen years and that’s a pretty good run, and I can see that he needed and wanted to change. Some artists paint the same thing their whole lives like Chagall and some artists paint something new every five or ten years like Picasso. It’s just a different nature of the artist.”

The comedic legend also took a moment to remember fond memories of Toronto during his salad days to shooting films like the Cheaper by The Dozen remakes in more recent times to working with Canadian funny men Eugene Levy, Martin Short and the late John Candy. “I came here first during the late Sixties, early Seventies as a comedy writer to work on some television shows which none of you will remember,” Martin reminisced to the media, “like The Ray Steven Show, Kim Barry’s Wow! Show and I did a show here in the early Seventies that was a half-hour show called The Funnier Side of Eastern Canada (click here for the link). And I was a young comedian who got hired for this (gig) and I kept saying, ‘Wouldn’t it be better to (call it) The Funnier Side of Canada?’ because Eastern Canada is very specific. And they said, ‘Well, it’s sponsored by Air Canada and they (didn’t) fly to Vancouver (then).’”

The Idea of North: The Paintings of Lawren Harris is currently at the AGO (317 Dundas Street West) through September 18. For tickets and information, call 416-979-6648 or ago.net.