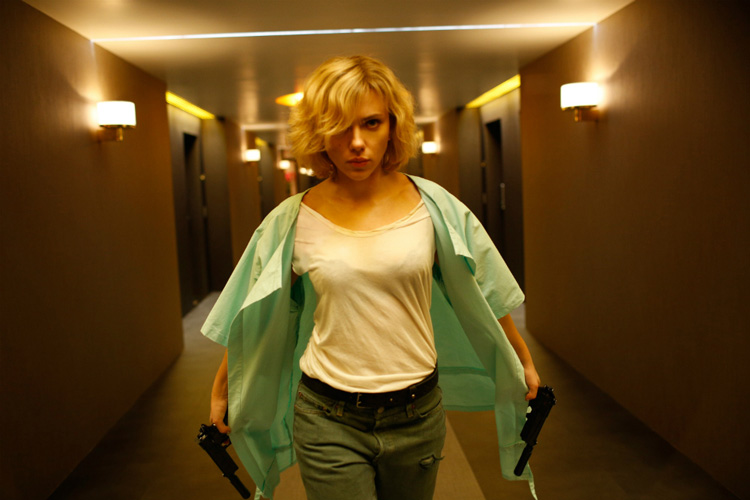 Luc Besson’s cinema isn’t for those who don’t enjoy his more intellectual action-thrillers. Oxymoronic as that term may sound to some, he does put in an awful lot of thought into them, like in his other films La Femme Nikita, Léon: The Professional and The Fifth Element. Back into the female-driven category with Lucy using those philosophical topics about existence, borders on the side of anticlimactic but it says more in depth.

Party-hardying and studying in Taipei, innocent Lucy (Johansson) gets forced into being a drug mule by a one-week stand (Pilou Asbaek) for a highly ruthless local crime boss Mr. Jang (Choi) along with a few unfortunates for a crystallized synthetic compound derived from pregnant women known as CPH4. As the others are whisked off to Europe, she ends up being beaten up by one of her captors that the bag in her abdomen ruptures within, making her brain absorb and uses the fullest capacity beyond normal human endeavour.

Outwitting her captors and feeling her humanity draining away, Lucy makes contact with brain neuron expert Dr. Samuel Norman (Freeman) visiting Paris where she must meet with before she reaches 100% of cerebral capacity and disappears from existence. Tipping off French police captain Pierre Del Rio (Waked) about the other drug mules and using her metaphysical powers to reach Paris, she’s pursued by Jang and his men who’ll stop at nothing to get the remaining CPH4 meant to be used as a recreational drug, while she needs it to stay alive long enough to unlock the secrets of the universe in time.

As in any film where one can predict the next gunfight or explosion of this ilk, Lucy is a differing change of pace battling against conventional thrillers, borrowing some things from The Matrix, 2001: A Space Odyssey and even The Fifth Element (minus the cheesy camp) Besson crafts some interesting time-lapse photography, documentary sequences and special effects moulded around Thierry Arbogast’s cinematography and Besson regular composer Éric Serra’s score fits in all of its moods.

Johansson’s already proven she can kickass as the superheroine Black Widow in the Marvel cinematic universe and sort of recreates that here, only she’s a vulnerable type aware of her mortality in making a tough decision with her transhumanist state quite tellingly. Freeman provides the grounded wisdom and commanding sub-narration on the complexity of cerebral capacity without it sounding like a dry academic lecture, while other supporting members Waked being the befuddled if sympathetic Euro cop with humour and bravery and Choi chillingly plays the baddie not afraid to get his hands bloodied in a literal sense.

It takes a while in the pacing to wrap your head around the film’s purpose and themes about the capability of human potential for something like Lucy may daunt those expecting the usual. But if you’re after a challenging story on life’s meanings, Besson does it again here with a keen sense of smarts. 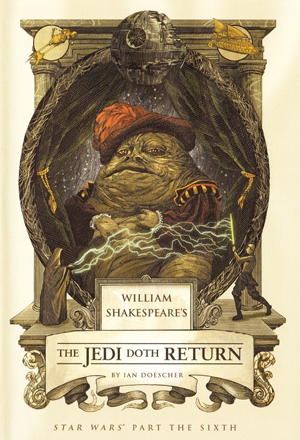 Return of the Jedi had supposedly bookended the entire Star Wars epic in 1983, until George Lucas finally decided to do the third and final trilogy with Episode VII currently being helmed by J.J. Abrams. With this kind of hype being played out between now and its Christmas 2015 release, it’s best to revisit what the “last” film left off and how Ian Doescher fills us in with his blend of Elizabethan theatrics and iambic pentameter as he’s done with the last two books for The Jedi Doth Return.

Nobody would have thought the idea of colluding the expansive universes of Shakespeare to Lucas’ beloved saga would be possible, let alone work as proved by Doescher’s adaptations demonstrated in the original trilogy’s final chapter. If The Empire Striketh Back was the broodiest part of the series, this one is its most Shakespearean in character and range.

The second Death Star is under construction orbiting the forest moon of Endor as overseen by the evil Darth Vader, just as the freedom-fighting Rebel Alliance learns of its secret location and plan on dealing a fatal blow to end the Galactic Empire’s tyrannical grip.

Meanwhile, heroes Luke Skywalker, Princess Leia, Chewbacca and Lando of Calrissian set out to free Han Solo from notorious crime kingpin Jabba of the Hutt’s clutches on Tatooine in a daring escape along with androids C-3PO and R2-D2 in time for the Rebel fleet meeting at Sullust; where afterwards Luke returns to the dying Jedi master Yoda who finally tells him the truth about his parentage to Vader and another revelation about his family.

As Han loans Lando his beloved Millennium Falcon to lead the space battle over Endor, the Corellian pirate-turned-Rebel general takes Luke, Leia, Chewbacca and the droids on a ground attack on the power generator shielding the unfinished Death Star with the help of the indigenous Ewok warrior tribe. In the midst of all this, the young Jedi Knight confronts Vader in the hope of turning him from the Dark Side of the Force as they clash lightsabers again before Emperor Palpatine. 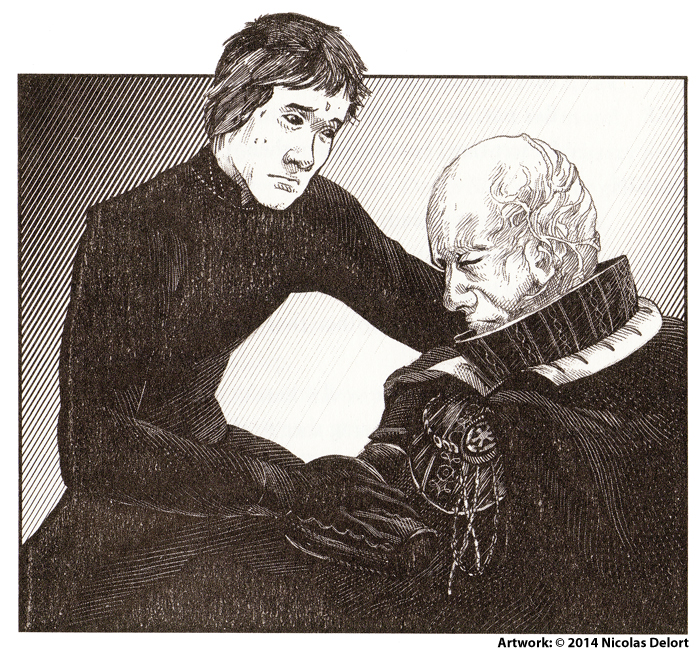 Doescher extends more soliloquies and introspections here more than he does in the other books or the original script for that matter (Jedi, as he states in his afterword, was his favourite Star Wars film) and keeping the alien languages intact, as the main characters all contemplate their roles and relationships to each other. The excitement still remains from the Great Pit of Carkoon to the climactic Battle of Endor, but its greatest scene – as it was in the film – comes as Luke unmasks a repentant and remorseful Vader near the end, finally seeking the balance of the Force and fulfilment of destinies.

Whether Lucasfilm will ever allow theatre companies to stage Star Wars from Doescher’s works in their entirety (only bit parts, they say) or if the author will convert the prequel and sequel trilogy (or the sly reference to an Extended Universe story) is yet to be determined. But for now, it’s amusing reading this particular exercise for The Jedi Doth Return, Nicolas Delort’s expressive illustrations throughout the book and one clever “Sonnet 1983” made for the book.

The Force moveth in thy enigmatical matters…

In the midtown Petroff Gallery beholds a mélange of jazz-oriented disciplines in the group exhibit simply entitled Jazz & Artfeaturing thirteen Canadian contemporary artisans practising their interpretations of syncopations throughout the tony gallery that go from the basically obvious to the sublimely surreal aspects of the musical art form itself.

Catherine Jeffrey sticks to local nightclubs for “Rainy Night at the Theatre” and “The Jazz Bistro, Victoria Street” capturing the past and present with her oils on canvas giving that watery effect; abstract “Ella’s Swing” weaves both pastels and earth tones bunched together in honour of the legendary chanteuse by Laurie Skantzos, whereas Peter Colbert brings out the West Coast cool in “Chutes” and “Coastal” swimming under its own acrylic strokes on canvas swirling in greens, browns and oranges.

The mixed medias of Marjolyn van der Hart consisting of collages encased in glossy resins for the retro-1950s of “It all came true” and ballroom days when big band swing was king in “She twirls with life.” Husband/wife ceramists Thomas Aitken and Kate Hyde’s untitled earthworks give the notion of musical movements that jazz gives with surface indentations and colourful glazes being most inspiring, as well as the glassworks of Renato Foti and Robert Buick representing experimental jazz in emboldened colours and metallics. 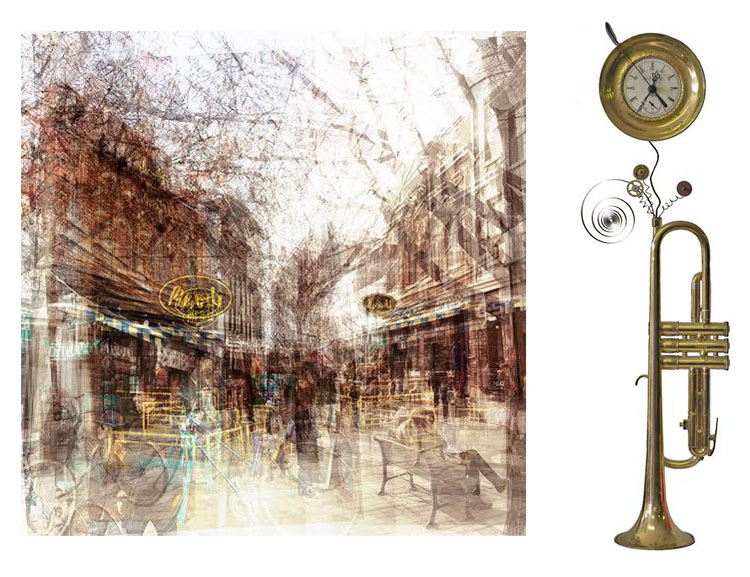 “Lateralus #73” forms its Möbius loop-like structure in its stainless steel element for both small and larger scales by Richard Sturgeon; Chris Albert does a photo-realistic erratic vibe in the digital print with resin overlays of the Queen Street West dives “The Rex” and “The Rivoli” and Brian Henry puts a soft temperament to the Spadina joint “Grossman’s Tavern” easy on the eyes, yet Roger Wood’s “Trumpet Clock 4373” are the whimsical pieces of the show using found pieces, mostly music instruments, and turning them into workable, steampunky timepieces are fun to watch, plus the cubist wire sculptures of James Paterson fit into the exhibit’s theme perfectly.

The space itself is gorgeously lit, although the only faulty thing about the place is that some of the pieces aren't properly labelled, making it almost hard to distinguish what’s what and who’s who. However their staff is very helpful and friendly and it’s a very calibre exhibit displayed, to say the least.