Looking to reinvigorate their classic Universal Monsters series from the 1920s to the ‘50s after a couple of false starts with 2010’s The Wolfman and 2014’s Dracula Untold, the studio reboots The Mummy into a contemporary action-adventure horror fare that slightly misses the mark, if not a noble attempt to play catch-up in the movie franchise craze that could have been better planned out.

Five thousand years ago, the beautiful if ambitious Princess Ahmanet (Boutella) was in direct line to the New Kingdom royal throne of Egypt until jealousy drove her to make a pact with the dark forces of evil, which were immediately quashed and got mummified alive in a secret tomb faraway from the land of the Pharaohs.

Zooming towards present-day Iraq where two foolhardy American soldiers, as led by Nick Morton (Cruise) and his partner-in-crime Chris Vail (Jake Johnson), set out to find treasures in the desert for their own profit and discover Ahmanet’s enormous tomb, courtesy of some deceptiveness on Morton’s part with the young British archaeologist Jenny Halsey (Wallis).

Transporting her sarcophagus back to England on a military transport, Ahmanet’s spirit is awakened and possesses Morton’s soul in the process in order to unleash her chaotic vengefulness for world domination. The only hope for him in breaking the curse and saving the world, sorted as it is, lies in the hands of one Dr. Henry Jekyll (Crowe) who runs Prodigium, a mysterious scientific organization dedicated to the finding, examination and possible destruction of the monsters in our midst; in finding the Dagger of Set to stop the otherworldly princess.

Given that two masterful screenwriters like David Koepp (Jurassic Park; Spider-Man) and Christopher McQuarrie – who previously directed and co-wrote Cruise’s decent Mission: Impossible – Rogue Nation – and with the combined star power of Cruise and Crowe, this would have been a more than plausible summer blockbuster.

Unfortunately the fault lies not entirely in these stars but with the director, Alex Kurtzman, better known for being one-half of the producers for the resurrected Star Trek film series; has very little experience behind the camera. He does offer moments of intensity, thrills and enough spooks, but a more seasoned filmmaker would have done a much better job in working around a semi-clunky script that’s long in places that weren’t necessary to the storyline.

Cruise works around a tailor-made script and role suited to his action talents with some elements of humour, yet it’s an average one and it wouldn’t be another franchise he could bank on as he seemingly coasts into the third-stage of his career; whereas Boutella makes one beast of a beauty as the deadly seductive antagonist against the film’s flawed hero. For the rest of the cast, Wallis has enough brashness as the intrepid Halsey who doesn’t fall sway to Morton’s charms so easily and Johnson makes for an okay sidekick for him if a much muted presence, however Crowe is relatively good as the well-meaning scientist grappling his own obvious demon he literally fights against, so there might be hope for his standalone project – should it even come to pass.

While it’s not an entirely bad idea for Universal to dig up their old Monster horror series (now rebranded as the Dark Universe series in a hopeful competition with the cinematic universes of DC Comics and Marvel Comics) into something sellable for today’s audiences, The Mummy just stumbles along in a slightly entertaining, if half-hearted effort. But just remember: for every Suicide Squad there’s also a Wonder Woman to come along...eventually.

Left-right: Eric Peterson is back as the World War I flying ace Billy Bishop in the titular comedy-drama masterwork Billy Bishop Goes to War and a ensemble gathers for the Soulpepper Theatre’s first podcast series, The Complete 150 in their Can-Con line-up this summer.

History makes up the bulk of Soulpepper Theatre’s summer line-up with the re-return engagement of a Canadian music theatrical classic, a World War I drama and an ongoing historical tragicomedy series of our nation’s history in what is expected to be the most engaging repertoire in the local theatre company’s twentieth season in marking Canada’s 150th anniversary of Confederation.

First out of the gate is VideoCabaret’s The History of the Village of Small Huts saga in their highly ambitious undertaking to date by going back to the very beginning in the two-part, one-act play Confederation Part I: Confederation and Riel (June 9-August 19), where a new nation is born under its first prime minister John A. Macdonald and most also contend with a Métis rebellion in Manitoba led by Louis Riel; followed by Confederation Part II: Scandal and Rebellion (June 23-August 19), as the tracks of the national railway are being laid, scandals plague Parliament with Macdonald found pocketing kickback guarantees and MP and future prime minister Wilfrid Laurier is caught cooing with his best friend?s wife and the Second Riel Rebellion threatens Macdonald?s unification plans with the west. 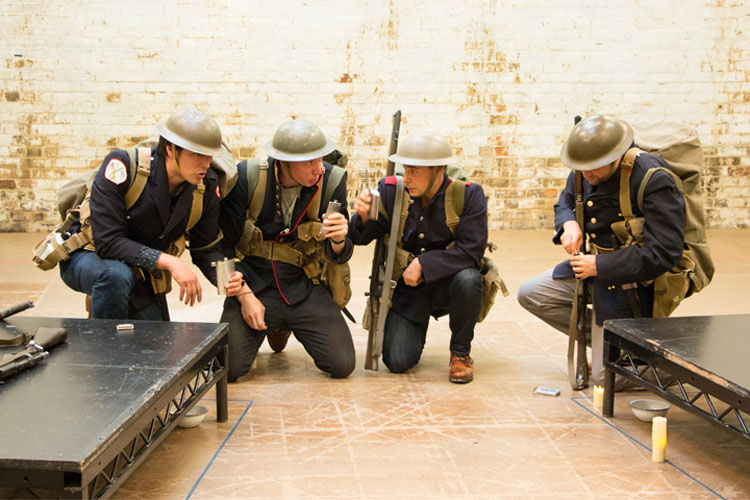 Vimy (June 29-August 5) recreates the horror of World War One in Vern Thiessen’s Governor-General’s Award-winning drama year where a group of Canadian soldiers recover in a French field hospital under the care of a young nurse after the battle that would define a nation – that recently marked its own centennial this year – but will forever physically and mentally scar the combatants in the incommunicable experience of war.

Coming back is the limited return engagement of Billy Bishop Goes to War (July 1-August 10), performed by its playwright/actor Eric Peterson and co-writer/composer John MacLachlan Gray; as the aging World War I flying ace and national hero reminisces his exploits and aerial dogfights in a 1950s nursing home is the seminal musical mixing comedy and drama that really shouldn’t be missed.

And going digital is their podcast The Complete 150, a satirical audio drama as created and written by Jason Sherman, directed by Wernham-West Director of Audio Programming Gregory J. Sinclair and performed by the Soulpepper ensemble and special guests, in a sixteen-part serial currently being posted over the next eight weeks every Tuesday and Friday until July 1st.

A feminist re-imaging of a royal power struggle and a bellbottoms-and-boogie comedy of errors launches Canadian Stage’s thirty-fifth Shakespeare in High Park season with the Immortal Bard’s King Lear and Twelfth Night, both running in repertory cycles June 29 to September 3 at the High Park Amphitheatre (1873 Bloor Street West).

King Lear (June 29-September 2) is set in the final days of the Elizabethan era as her Majesty Queen Lear, as played by original Shakespeare in High Park veteran Diane D’Aquila; divides her domain amongst her three daughters that inevitably leads to familial discord, civil war and downfall that only she can attempt to resurrect in order to salvage what?s left of her legacy.

Twelfth Night (June 30-September 3) takes a nod toward Billy Wilder and Wes Anderson under the 1970s halcyon days of disco as a young shipwrecked noblewoman looks to reunite with her long-lost twin brother on a island hotel, while a lovesick duke longs for a countess and a bunch of mischievous courtesans get caught up in the mayhem.

New this year, Canadian Stage will offer free all-ages pre-show programming and day-long events at the High Park Amphitheatre throughout the summer, funded by the governmental Community Fund for Canada’s 150th, offering called Territorial Tales, a showcase for diverse young writers inviting High Park audiences to experience three new short theatrical works on the theme of displacement, migration and settlement. Staged by three emerging theatre creators, Aaron Jan, Fiona MacAulay and Luke Reece, and performed by an ensemble of youth performers, Territorial Tales will run from August 3 to September 2 on Thursdays and Saturdays.

“We are excited to celebrate this thirty-fifth anniversary by putting on two of Shakespeare’s true masterpieces: King Lear, in its Shakespeare in High Park premiere, and the delightfully heartful and musical comedy Twelfth Night, an enduring favourite staged in a new light,” said Canadian Stage Artistic and General Director, Matthew Jocelyn.

“Alistair Newton (King Lear) and Tanja Jacobs (Twelfth Night), who are graduating from York (University)’s MFA Program in Stage Direction in Collaboration with Canadian Stage, direct these two iconic works with a theatrical gusto and contemporary socio-political depth. With a multi-talented acting company led by the incomparable Diane D’Aquila – a company member of the very first Shakespeare in High Park thirty-five years ago, it is a fitting way to recognize the past, present and future of Toronto’s most popular outdoor theatre tradition.”