A veteran photojournalist on the arts and entertainment scene,, Julian Bynoe is a Toronto-based cartoonist, artist and arts blogger. From 1996 to 2014, he was the arts/entertainment editor for the street publication The Outreach Connection, and has had articles featured in Realms Magazine, among others. 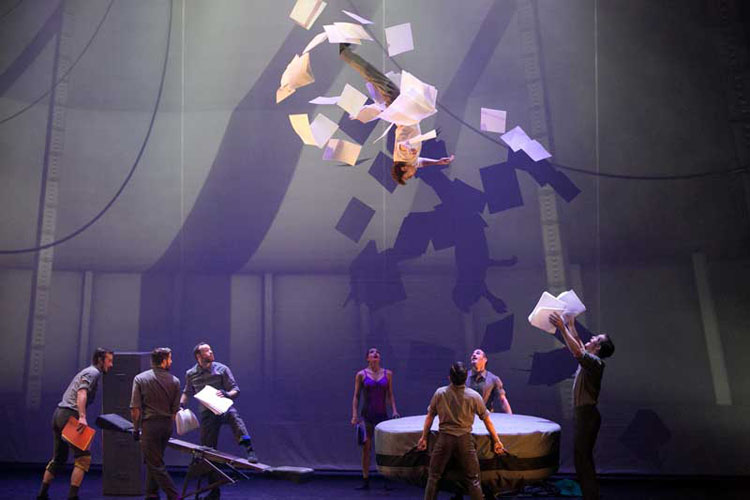 Reimagining a circus into a gritty noir may seem like a daunting task, yet Cirque Éloize manages to pull it off in their return to Toronto for their award-winning 2012 production Cirkopolis. A more scaled-down show than their previous one iD a few years ago here, the Montréal-based company keeps the basics down to pat in an entertaining way, even if some of their stuff tends to wobble a bit here and there.

In a cloistered, imaginary metropolis with endless skyscrapers and gigantic industrial gears lurking in every corner and portal with that unrelenting feeling of being crushed of any kind of expressive freedom and individuality, the figures of Cirkopolis find ways to break away from the monotony that represses their lives through several acts dispensed over the 90-minute production directed by Dave St-Pierre and Jeannot Painchaud.

Where it works as a updated Modern Times are performed by the troupe range from the near-balletic Cyr Wheel act by Nora Zoller, the company ensemble looser juggling banquine line, the Chaplinesque clown antics of Jérémy Vituper, Jérémie Robert and Antonin Wicky and the most daringly energetic Chinese pole act I’ve seen in ages by Alexie Maheu and Wicky; all against the impressive greyish video projections to embellish the feeling of loneliness in the city’s edginess with occasional bits of brightness peeking out as it does for Selene Ballesteros-Minguer’s seamless climbing rope act.

Where it doesn’t, unfortunately, is the stiff Plus Cubic act and the oft-jarring soundtrack to the show that tries perhaps too hard to sound a little bit like Leonard Cohen’s lyrical compositions that make little sense to whatever is going on at times – with those minor exceptions whenever they go into a jazz swing mode or the high trapeze act working in a playfully childlike manner to some whimsical Peter Gabriel-inspired number – and is somewhat repetitive in places.

However, if you’re looking to get your Cirque fix, Cirque Éloize will fill that prescription for all the darkness it encompasses in Cirkopolis that offers some surprises, humour, slapstick wit and melancholy in these times of darkness that does promise a light at the end of the tunnel despite in what seemingly is a long way off, but at least it tries its best.

In one of the more shameful and shocking chapters of sexual predators in loom in Canadian history in recent times came not by some average, nondescript person from the hinterlands of suburbia, but from a highly-regarded and once-trusted member of the Canadian Armed Forces. Former colonel Russell Williams, who was commander of the CFB Trenton, a part of our national security inner circle – he even flew on a couple of VIP government flights from former Prime Minister Stephan Harper to Queen Elizabeth II – and his promising star on the rise to maybe becoming a general one day; came to a end when the double life he was living as a underwear-stealing cat burglar in the Ottawa and Belleville areas turned to extremes by branching into sado-sexual murders that finally caught up with him and rocked the military and the nation.

Poetic theatre company One Little Goat takes a huge risk in staging the true-life ten-hour procedural transcript interrogation of Williams by Ontario Provincial Police Sergeant Detective Jim Smyth by crunching it into the 90-minute, female-centric play Smyth/Williams is nothing short of disturbingly mesmerising, yet it does encounter a few bumps along the way.

Performed by Deborah Drakeford and Kim Nelson, who tend to alternate between roles of the investigator and the investigated along with drummer Lynette Gillis punctuating certain moments and the (heavily) censored transcript gaps with her drum beats and percussions; start off as a casual interview in a OPP police station interrogation room on February 7, 2010 with both men seemingly calm and assured.

As it stretches into a four-and-a-half hour session, it uncomfortably unravels when Smyth talks about the home invasion rape-murders of Jessica Lloyd and Marie-France Comeau, the latter an army associate of Williams; plus two other sexual assaults that the evidence slowly leads toward him, it turns into a psychological breakdown of the disciplined career military man who’s order crumbles away into confession and self-admittance to his crime spree.

Smyth/Williams is a atypical production that doesn’t play it straightforward in order to give it some sense of aesthetic composition as directed by Adam Seelig, as the two actors and musical accompanist try to give it some weight and scale as it does in the beginning, but by the middle the play tends loses cohesion before it saves itself when it comes to the damning confession that the tension fully comes out, all on a punk-inspired set design by Jackie Chau and conspicuous lighting from Laird Macdonald in the restrictive if appropriately-sized venue to give it more atmosphere.

One cannot fault Drakeford and Nelson with the play’s sagging middle, as their performances are heavily stark and focused on the material and topic. Without going into the gory details of Williams’ crimes, neither one does offer (and nor should it) any off-stage explanation as to what possessed him to rob 82 houses and steal pubescent girls’ underwear and women’s lingerie that later developed into something abnormally heinous, and nor is it ever exploitive in looking to gain some sense of sensationalism.

And that’s mainly the point of the play, as it offhandedly addresses the issue of women serving in our Armed Forces where one quarter of them have been sexually assaulted by their male comrades and officers, as well as engage into a discussion of rape culture in society that sorely needs to be addressed.

In all my years of reviewing theatre, Smyth/Williams is the very first time there wasn’t any after-performance applause from the audience. Given the heavy nature of the play, it lets one allow something to sink into the mind about violence against women and whatever demons permitted Williams, now serving two life sentences at a Port-Cartier, Québec maximum-security prison; to succumb to his darker nature. It’s not an easy sit-through and the play unnecessary wears itself down, but you won’t walk out of it untouched by the performances and its story.