I wish there was a treaty we could sign/

It's over now, the water and the wine/

We were broken then but now we're borderline/

As we say goodbye to Canadian Renaissance man Leonard Cohen who passed away on November 7, here’s a couple of comic strips from my Hounds of Love series; a black-and-white comic strip from the 2009 archives and this more current colour one made for this occasion, where my characters pay tribute to the gravelly-voiced man of many words. So long, Leonard…we’ll always have Manhattan – and Berlin.

The return engagement of Darren Anthony’s Secrets of a Black Boy however brief it is, never shies away from the subject matter involved in what it is to be a North American of African descent in the 21st-century which hasn’t changed all that much from the last century, unfortunately. However touchy the subjects may be, this comedy-drama educates as much as it does entertain.

Guidance counsellor Sheldon (Al St. Louis) gathers his old friends Jerome (Mark Sparks), Jakes (Troy Crossfield), Sean (Julien Hyacinthe) and Biscuit (Samson Brown) for one last dominoes game at the community centre they’ve attended for almost 25 years before it becomes the victim of a land developer’s wrecking ball, reminiscing about the old days and catching up on what’s been happening with their lives.

In between the game and unabashed machismo running rampant as the nearby DJ Dwayne (DJ O-Nomymous) spins out tunes, they open up certain vulnerabilities that they probably wouldn’t say outside of their own circle: Sheldon facing up to big life changes and the difference he wants to make; the street-smart Biscuit remembering his fallen pusher brother and the reluctant burden he continues on in his name; ladies’ man Sean explaining his preference for women outside of his race; club promoter Jerome’s insecurities getting the better of his nature and Jakes revealing a unrequited and forbidden love as he preps himself to be the best man at his best friend’s wedding.

There’s a lot of heavy stuff being touted in Secrets and Anthony hits on all cylinders regarding police brutality (heard about on the R&B conscience tune “It Could Have Been Me” and the cast’s monologues), racial profiling, black-on-black violence, relationships and on growing up into the men they’d want to be – and like to be – as well guided by director and dramaturge Kimahli Powell in this two-hour play.

The cast puts out a lot of energy and fervour in their excellent performances from their frat boy banter (their “Ten Rules for Black Women” skit borderlines on being slightly sexist, but is a riot) carry about to the seething misogamy rising from both Sean targeting female empowerment to justify his attitude towards women and Jerome over his abandonment issues is unflinching and uncomfortable watching – and necessary viewing.

DJ O-Nomymous’ score of old- and new-school tunes stay in line with Gavin Bradley’s score and enhancing the archival and current projection footage of the civil rights struggle from Selma to Ferguson designed by Laura Warren around Bonnie Beecher’s lighting effects on the very simple cardboard box-littered set design of Glenn Davidson. Secrets of a Black Boy is a highly revealing play on what it is to be black and the fears it carries well, as so demonstrated in the midst of the Black Lives Matter movement that pointed it out what was (and still is) going on in the diaspora.

Secrets of a Black Boy continues until this Sunday (November 20). For tickets and information, call 416-504-7529 or passemuraille.com.

Producers: Will Packer and Mikael Hed

You know the holidays are coming when you start seeing similarly-themed films heading for the cinemas early and first out of the gate is the average dysfunctional family comedy-drama gathered together for the season type of film for Almost Christmas. From the writer-director behind 2013’s Baggage Claim, David E. Talbert thankfully isn’t out to make his own version of National Lampoon’s Christmas Vacation since it aims for getting to the reason for the season, minus any gross-out humour.

For the first time in many years, retired auto mechanic Walter Meyers (Glover) is facing the Christmas season without his beloved wife Grace since her passing over almost a year ago and an empty house full of memories in Birmingham, Alabama. The quietness won’t be around much longer as his four grown children and three grandchildren are heading home for the next five days and the only thing he’d like is that everyone should try to get along.

That’s a tall order to ask for, considering snotty eldest daughter Cheryl (Elise) has a knack of picking out everybody else’s faults while blind to the cracks in her marriage to NBA washout husband Lonnie (J.B. Smoove) clinging onto his former glory days to anybody who’d listen; divorcee daughter Rachel (Gabrielle Union) with tween daughter Niya (Nadej Bailey) who’s kind of indecisive on her career goals and a constant target of big sister Cheryl’s barbs.

Eldest son Christian (Romany Malco) has his family and campaign manager (John Michael Higgins) in tow with his run for U.S. Congress seeming to be getting in the way of spending quality family time and being slightly blinded by political ambitions, while kid brother Evan (Jessie Usher) is a college football star feeling the loss over their mother the most who’s drowning his sorrows with painkillers.

With the usual concoction of sibling rivalry, bickering and personal problems swirling amongst this familial maelstrom, like Rachel still giving ex-high school sweetheart and neighbour Malachi (Epps) the cold shoulder for a prom night dumping way back then yet still carries the torch for her as an example; upping the ante is their profane backup singer diva Aunt May (Mo’Nique) also staying at brother-in-law Walter’s place for the duration and pure chaos is eminent.

Talbert sticks to the standardized formula of laughs and dramas, but he knows how to put a good ensemble to work here on their strengths in the type of script and pace well suited for a TV sitcom and digestible to enjoy. The performances ring true from the cast with Glover as the matriarch trying to keep it all of this madness together in his mourning state by trying to replicate Grace’s famous sweet potato pie without the recipe, reaching out to Evan in relating to his own pain and spending time volunteering at a local homeless shelter is touching and human enough (plus he does get the chance to say his iconic Lethal Weapon catchphrase in one key scene).

Mo’Nique chews up her scenes at every chance she gets when swilling her sassy self in alcohol but knows when to deliver warm, worldly advice at the right time; Higgins as the average white guy doing great in putting his foot in his mouth adds another sense of comic relief and surprisingly, the child actors playing the grandkids aren’t precocious here, especially Bailey making her film debut as the wise beyond her years progeny when she’s dishing out advice to her single mom on opening up her heart again.

Almost Christmas probably won’t stand among the seasonal greats like It’s A Wonderful Life, Miracle on 42nd Street or The Polar Express, yet it comes pretty close on the theme of family staying together at the toughest of times through the film’s camaraderie, its classic funk/soul soundtrack and laughs and it’s much better than sitting through one of Tyler Perry’s Madea flicks. 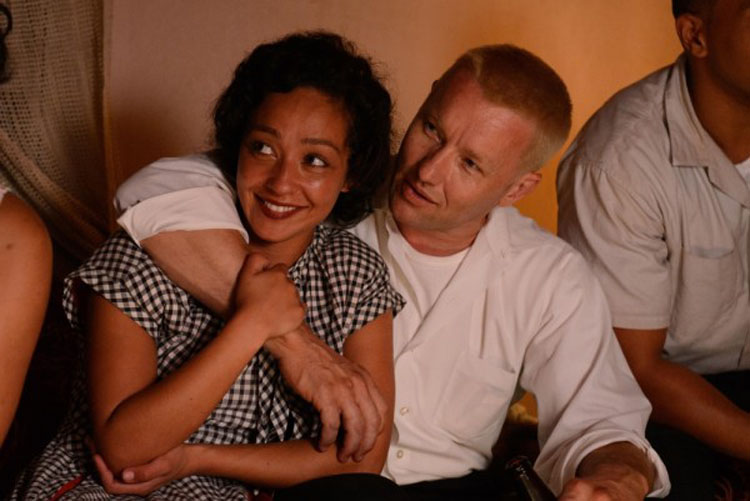 Loving stands alone as a unique kind of historical-melodrama behind the true-life story of one interracial couple’s fight for their right to be together during a volatile time in modern American history, taking an on quieter nature uncommon for a film like this that works out for itself and standout performances most befitting for the brave subjects in question who dared to even question ingrained bigotry and changing the laws of the land.

Bricklayer Richard Loving (Edgerton) is a rarity in his Virginian small town in 1958, being one of the few whites that really get along with the African-American populace, particularly when he’s openly seen dating his tobacco field worker girlfriend Mildred Jeter (Negga) and his friends without so much as a care in the world. When she tells him she’s pregnant, Richard is overjoyed and proposes to her with the promise of building their dream home on a plot of land he’s bought for them.

Since mixed marriages were illegal throughout the American Southland long before and after the Civil War, they get married in a Washington D.C. courthouse with her cousin Davis (Lance Lemon) as their witness. Dragging them out of their bed with Mildred six months pregnant by the police for breaking the segregation laws one night and held overnight in jail, the couple get a suspended sentence from spending a year in prison provided they leave the state and not return for twenty-five years. Relocating to Washington, they sneak back briefly so that their firstborn son Sidney could be born on Virginian soil only to get arrested again for breaking parole, but spared due to the circumstances of Mildred having just given birth.

Five years and two more children later, she gets tired of living in exile from her family and city living in general. Fortunately for her, it’s an opportune time when the Civil Rights movement is underway and Mildred writes to Attorney-General Robert Kennedy on their case. Referred to ACLU lawyer Bernie Cohen (Kroll) who eagerly takes on the cause as a way to bring an end to the miscegenation laws nationwide, the Lovings get embroiled in a nine-year battle with Virginian courts and undue media attention as just being ordinary folks wanting to live out their lives as a married couple raising their family like everyone else.

Having recently premiered at this year’s TIFF and a competitor for the Palme d’Or at Cannes, Loving is a mild-mannered love story taken with a casual and noble structure done by writer/director Jeff Nichols (Mud; Take Shelter) and never goes overdramatic for the sake of dramatics where it counts in keeping it honest in dialogue and pace, including in the few moments when the obvious racial tensions comes up from when they’re incarcerated for the first time to one of Richard’s buddies in a juke joint scene who subconsciously brings up the marriage subject of him thinking he’s “one of the boys” when it’s evident he’s more privileged than others.

Edgerton and Negga both play the Lovings with subdued, graceful conviction and the inner strength to go against the odds both in private and in public, never looking to be trailblazers or even activists out to make history about two genuinely shy, simple people who took their challenge all the way to the U.S. Supreme Court and won. Kroll, as their lawyer, does provide a little humour to the story while still keeping things evenly cordial.

The film plays it all humbly straightforward from beginning to end as a gentle study on U.S. race relations that now feel tame compared to the present-day situation and facing a post-Obama America, when even having their first African-American president didn’t really resolved those things we’ve naively thought it had disappeared long time now.