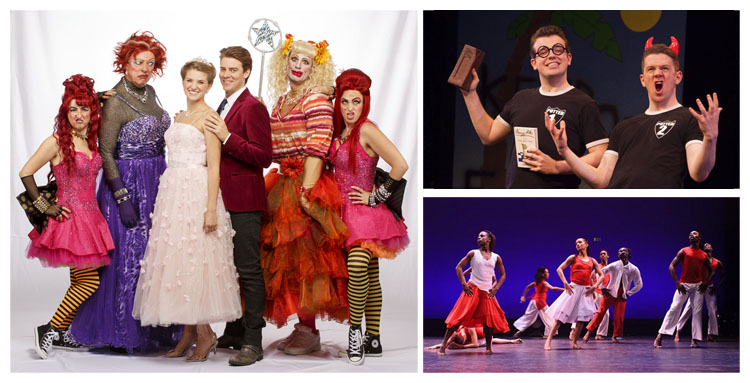 The solemn and silliness of the holidays comes upon Toronto in a huge variety of traditional and non-traditional goings-on from now until New Year’s with events and shows from keeping the kids entertained and to reflect on the meaning of the season.

Harbourfront Centre’s Ice Rink may get all the attention during the winter months, but their free annual SWEA Toronto Christmas Festival November 23 to 24 weekend offers those who want to get a head start on shopping for traditional Swedish gifts, crafts and foods plus the two-shows daily Lucia pageant of children singing Swedish Christmas carols, folk dancing, children’s crafts and more.

Michael Shamata’s hugely popular adaptation of Charles Dickens’ A Christmas Carol returns to Soulpepper Theatre (50 Tank House Lane) November 27 to December 27 this year as the not-to-be-missed show of the season about the rich financer Ebenezer Scrooge’s visitations by the three ghosts of Christmas on Christmas Eve to exorcise his miserly ways and to understand the importance of charity is an ultimate treat and the magic of David Ben's The Conjuror appears for a limited run from December 30 to January 2.

And since this being the season of charity, the travelling school theatre company Roseneath Theatre is running a one-time special fundraiser production of Outside on November 26 at Buddies in Bad Times Theatre (12 Alexander Street) for their fall 2015 provincial tour of the Grade 7 to 12 show, about the homophobic bullying of teenaged Daniel and his two straight friends who look to establish a gay-straight alliance in their respective schools; which will be seen by 100,000 students across Ontario starting next spring.

St. Michael’s Choir School hits the Massey Hall (178 Victoria Street) for their 74th holiday concert December 6 and 7. Having toured the world, including a performance in Vatican City last April for Pope Francis I, the 270 choristers will be joined by True North Brass and the Schola Cantorum Strings group conducted by Jerzy Cichocki, Terri Dunn and Kathleen Allan Roark and organist William O’Meara playing the sacred and secular songs of the season.

The “undisputed Queen of violin playing” Anne-Sophie Mutter and her 14-member Mutter Virtuosi chamber orchestra will make their Canadian debut November 21 at Roy Thomson Hall (60 Simcoe Street) for an evening of Mendelssohn, Vivaldi and newly-commissioned Ringtone Variations by American composer Sebastian Currier as part of their 2014 North American tour.

For more out of the usual, The Theatre Centre (1115 Queen Street West) remounts the Dora-nominated World War II romantic-drama Ralph+Lina November 28 to 30, performed by husband-wife team Dan Watson and Christina Serra, based on the true-life exploits of Serra’s Italian grandparents; Canadian Stage nicely gets on the naughty list with the triumphant return of Venus in Fur December 18 to 29 with Rick Miller and Carly Street’s final reprisals of an actress and a playwright/director’s catty-and-mousy game of sexual politics in the theatre at their Berkeley Street Theatre (26 Berkeley Street) location and the Sony Centre (1 Front Street East) goes head to head with cinematic concerts of the Academy Award-winning swords-and-sandals epic Gladiator Live (December 5) and Distant Worlds: Music from Final Fantasy (December 6) based on the popular videogame series, as both get big screen and orchestral treatments.

Last but not least, family fun comes from Ross Petty’s gags to riches pantomime Cinderella November 21 to January 4 featuring Wizard of Oz’s Danielle Wade as the heroine looking to catch her princely suitor Jeff Lillico with the help of her Fairy Godmother a.k.a. Plumbottom von Botox – Dan Chameroy’s fifth appearance as his draggy alter-ego – battling her evil stepsisters Patty Sullivan and Cleopatra Williams, all led by producer/villain(ess) Petty as the stepmom from hell at Elgin Theatre (189 Yonge Street). And back by popular demand in time for the holidays is Potted Potter, the crazy-funny and unauthorized parody of the Harry Potter saga run by pranksters James and Benjamin squeezing all seven of the fantasy book series in under 70 minutes at the Panasonic Theatre (651 Yonge Street) December 17 to January 11.

One mother of a ride

The Motherfucker with the Hat (Bob Kills Theatre/Coal Mine Theatre)

The Coal Mine, 798 Danforth Avenue (downstairs at The Magic Oven)

Lover’s spats are messy and uncomfortable affairs to contend with, particularly when you’ve got a front row seat to it as experienced at the Danforth’s Coal Mine Theatre space for Stephan Adly Guirgis’ controversially acclaimed The Motherfucker with the Hat to get the full effect of the play’s emotional levels has more to say than just its provocative title alone.

Ex-con Jackie (Sergio Di Zio) is on a new high on life that he couldn’t get from his previous days as a drug dealer now on parole, having landed a real job and staying clean and sober. Going to his long-time girlfriend Veronica’s (Melissa D’Agostino) apartment to celebrate his good news, he comes across a hat on a table that isn’t hers…or his.

Trying to remain civil and calm as his world slowly crumbles upon this discovery, he retreats to his friend and sponsor Ralph D. (Ted Dykstra) and his wife Victoria’s (Nicole Stamp) place when he doesn’t get any straight answers about his junkie girlfriend’s supposed infidelity. Numb yet angry, Jackie tries to make some sense of it with Ralph and Cousin Julio (Juan Chioran) as things get more and more complicated by the minute without wanting to engage in some regretful restitution and whether they can rebuild their lives and dreams to what it was before.

Director Layne Coleman guides this play’s volatility and quieter modes with enough efficiency with his talented cast of Guirgis’ Tony-nominated examination on trust, addiction and moral ambiguity complex as it may be in a mixture of spastic language, humour and drama all under a 90-minute rollercoaster ride in a tightly-confining space and intimacy with Steve Lucas’ economical set and lighting décor.

Di Zio’s befuddled Jackie can go from energetic to low, from fast to furious as he shapes on keeping the character on the straight path with his performance; Dykstra plays Ralph for all his twisted logic, contradictions and phony New Age talk that he tries to adhere and impart on others, yet at the same time he’s playing a person who doesn’t seem to like himself very much with little remorse.

Remaining members D’Agostino and Stamp add to their parts all the pathos they can muster and while Chioran tends to be this ambidextrous character not part of this loveless triangle to the point of caricature, he does tend to steal the best moments here doing his best to Jackie’s voice of reason and the one who has it all together with more hilarity.

Stark and direct,The Motherfucker with the Hat is a mother of a ride grappling with human frailty and temptation that often fails us to remain good in the face of personal betrayal as Ralph puts in at one point near the end: “Sometimes the truth is ugly. But we got to face it and turn the page.”

The Motherfucker with the Hat continues through November 30. Tickets/information: brownpapertickets.com. 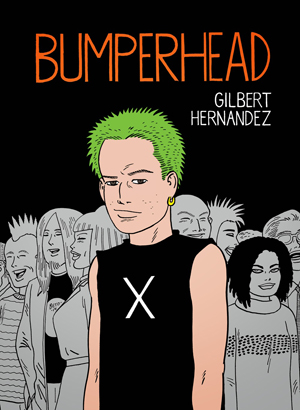 Drifting through the hubris of life is never an ideal life choice for any, but for some it’s not a choice at all or even a fault of theirs as seen through Gilbert Hernandez’s Bumperhead on teenaged angst and disillusioned with young adulthood by one of the pioneers of the 1990s alternative comics scene as the co-creator of Love and Rockets.

Growing up in a textbook American suburban neighbourhood in the late 1960s, Bobby contends on being taunted by his protruding forehead (as the “Bumperhead”) and living with his dysfunctional parents of a distant chain-smoking mother and plant worker Mexican father who knows little English and a silent disposition, along with the odd assortment of personalities ranging from the biblical rambling neighbour Mr. Moco; best friend Lalo who somehow manages to possess an electronic tablet that can see the future 40 years before its existence; unrequited crush Lorena Madrid and her kid sister (and future girlfriend) Chili and others who make up the fabric of his so-called life. 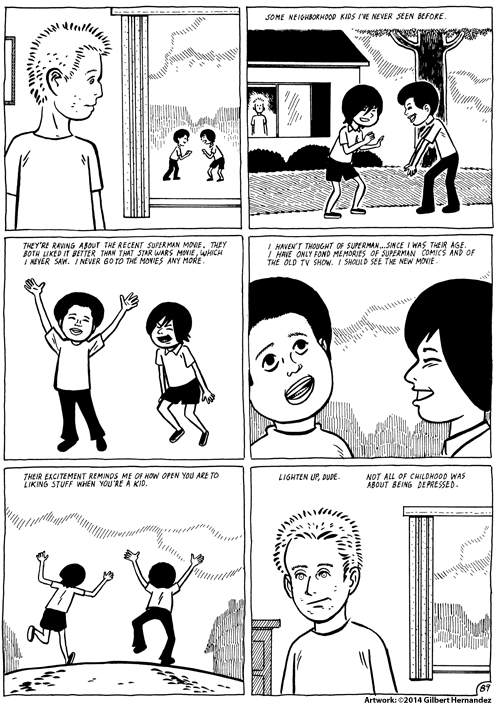 Absorbing the music of his teen years from glam rock to punk rock along with the usual sex, drugs and alcohol usage, Bobby’s rebellious nature isn’t any more different if just a bit static in his behavior and outlook on the world. Ending up in a dead-end job and growing obesity problem to learning about his father’s secret life south of the border that comes to blows and a tumble of missed opportunities, Bobby is unable to connect to anyone regarding his isolationism and wanting to find some sense of happiness that seems elusive to him.

Bumperhead may border on the dreary, it’s also about as honest about the antihero’s lack of purpose, and yet coming to terms with the things he cannot control or continue moping about through Hernandez’s straightforward black and white artistry and dialogue readers have come to familiarize with. Here, the author’s storyline rings a lot of discord of a post-boomer generation who has had to live basic lives and face some bittersweet realities.

Hernandez goes into a dark place for Bumperhead and comes out with full clarity for the fully-fleshed out characters that are flawed, socially maligned and human at best that even ordinary people can have extraordinary lives more bountiful that those who stand out more than most.