Eight hundred years after the Magna Carta was signed by Prince John, the document essential to a majority of the world’s democratic constitutions from our own Canadian Charter of Rights and Freedoms to Tunisia’s post-Jasmine Revolution constitution that enshrines that global warming is a threat to its national security (the first – and currently only – country that has such a clause), makes its anniversary world tour stop at Toronto’s Fort York for a limited engagement in what its history involves and how it has effected our nation’s own governmental institutions.

Frankly, it’s a relatively small exhibit that starts with a fifteen-minute video with animated historical segments narrated by Gordon Pinsent and documentary-like moments with Prince Charles introducing the brief history of the document and its importance to the everyday we don’t often consider on the basic Rule of Law, revealing a lot of unknown things that went into its creation.

For instance, it was born out from the unjust rule of England’s Prince John who took over the throne after the death of his childless brother King Richard II and inherited a costly war with France and a crushing national debt that launched unfair taxation without representation with cruel results on those who resisted, except for a band of rebellious barons who seized London in May 1215 and the facing the threat of civil war, forced the monarch – who also inspired the universally-lauded folk tale Robin Hood – to sign the very first Magna Carta on June 15 of that year, establishing human rights, trial by jury and fair justice for the common person.

Upon entry of the said exhibit on loan from England’s Durham Cathedral, on display are the surviving copies of the 1217 Charter of the Forest and the 1300 treaties (the 1215 original is back the cathedral 10,160 kilometres away from here) may look fragile upon first glance in illegible Latin and its 63 written clauses but their wording contains a strength and symbolism that hold up longer than any powerful dictatorship on Earth and how infectious its influence has embellished on our society.

Surrounding the parchments are interactive screens and displays with some information on our constitutional laws hold some interest. And don’t pass by the complimentary exhibit within the space Toronto’s Champions of Justice in the Vault section discussing our city and province’s democratic roots from William Lyon Mackenzie’s disastrous Upper Canada Rebellion of 1837 to enforce political reform to the 1996 anti-“Megacity” movement that tried to stop Premier Mike Harris’ forced amalgamation of Toronto led by former Toronto mayor John Sewell and education activist (and future Ontario premier) Kathleen Wynne; plus other bold gestures like the 1793 edict from Lieutenant-Governor John Simcoe abolishing slavery, to the movements to establish rights for women and the gay community.

Seeing the Magna Carta is a one-time experience that shouldn’t be ignored fully, so catch Law, Liberty & Legacy while there’s a chance.

IFOA@Magna Carta and the Modern World with Dr. Carolyn Harris gives a talk on the importance of the document in connection with present-day literature on October 22 at Fort York. For more information, call 416-973-4000 or visit: ifoa.org.

Screenplay: Aaron Sorkin; based on the book by Walter Issacson

Most biopics take the usual cradle-to-grave approach that feels all so routine and predictable, but that’s not found in the simply titled Steve Jobs as directed by Danny Boyle on a well-proportioned and sharply sculptured script by Aaron Sorkin, who also did the same treatment for The Social Network; for a warts-and-all story clearly out of convention on the technological mastermind behind the personal computer revolution that changed the world in how we communicate, work and play.

Broken down into a tripartite-structured format surrounding on his creative touches on the pivotal moments of Steve Jobs’ (Fassbender) career, starting with the launches of his three best-known products: the Macintosh in 1984, the 1988 solo project NeXT after his split from the company he co-founded Apple Computers and his 1998 masterpiece comeback iMac, swirled around the anticipation and anxieties of both his business and personal life clashing together into the drive, passion and ego behind the man.

As guided with his marketing executive manager/confidant Joanna Hoffman (Winslet) in trying to get the presentations down to a fine tooth comb and often driving his tech guy and co-inventor of the Macintosh Andy Hertzfeld (Michael Stuhlbarg) crazy with the details even if it means breaking a few rules minutes before showtime with a unfinished product, he’s also embattled with his partner Steve Wozniak (Rogen) on the left begging him to recognize the hard work behind their previous products Apple I and II that made them rich and famous; Apple CEO John Sculley (Daniels) on the right who left Pepsi to run the PC company and would later oust him over his erratic demands and dead front and centre is former girlfriend Chrisann Brennan (Katherine Waterston), the mother of his firstborn child Lisa whom he initially denied paternity to and struggles to acknowledge his responsibility and welfare to their child.

In each successive stave, the film goes from his young, brash, arrogant and egotistic demeanour of a visionary highly aware of his talents and contributions to society, if blind to the toes he steps on along the way to the reflective, semi-calm mannered man who finally sees what made him, including making amends with his daughter in his maturing years.

Doyle, ever the eclectic chameleon of current cinema; defies being pigeonholed again in avoiding the pitfalls that felled the previous biopic attempt on the innovative tech giant with the 2013 film Jobs with Ashton Kutchner; by keeping the styling of the 1980s and ‘90s periods to good usage mostly in part to cinematographer Alwin H. Küchler and Elliot Graham’s editing for all its cohesiveness (and yes, the mythos behind the birth of the Apple Computer in Jobs’ Los Altos garage is included, too).

Fassbender puts on one of his top performances of his career as the eponymous figure by staying focused on Jobs’ character constantly in turmoil of trying to live up to the genius he presented to the world, as he hides his inner battles from his parentage to the relationships he often sacrificed and weighing the consequences in the aftermath, even in the awakening of trying to be a better father in all stages of Lisa’s life; that could take him to serious contender considering come major awards time.

Rogen is startling good in his dramatic debut here as Wosniak, a far cry from his usual stoner comedic roles he’s noted for, while maintaining some sense of humour in his clashes with Jobs; Winslet’s excellent playing Jobs’ harried confidant out to make her boss happy and in getting his priorities straight with Chrisann and Lisa, while Daniels and Waterston play small if important parts in shaping the complexities of both business and private matters. While Lisa Brennan is played at ages 5 (Makenzie Moss), 9 (Ripley Sobo) and 19 (Perla Haney-Jardine) with equal conviction, they all embody the awkward and emotional anchor missing – and later redeeming – in Jobs’ hectic life.

Slating itself as one of the best films of the year, Steve Jobs weeds out all the mucky-muck of biographical filmmaking in skipping all the small, unimportant parts and getting to his passion behind his work with Doyle putting a human face on him instead of the iconic facet and the machines he took great care to make them essential to our everyday lives. 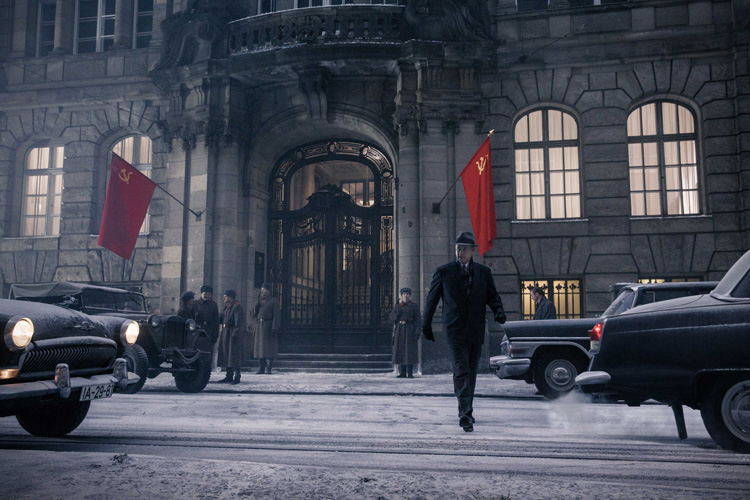 Living in an era of what the late Russian leader Boris Yeltsin predicted would come to pass between his country and the United States as the cold peace which now stands with current proxy crises from Crimea to Syria, it’s almost hard to imagine what the Cold War was like now for a generation that had lived under the threat of nuclear annihilation from the superpowers. Given with Steven Spielberg’s true-life espionage thriller Bridge of Spies, it comes well close in reproducing that period with a full, realistic feeling.

Captured by FBI agents in 1957 Brooklyn, a low-keyed artist – and KGB spy on the side – named Rudolf Abel (Rylance) is given an attorney for his defence to show a fair sense of Western justice to the world amidst the hysteria of the times, when Communist witch hunts, duck-and-cover drills in American schoolrooms and executing spies were the order of the day. James Donavan (Hanks), a mild-mannered family man who’s been dealing in insurance claims for the last few years, is brought back to do criminal law by his boss and partner Thomas Watters (Alda), finds certain flaws in Abel’s arrest but manages to spare him the electric chair and earns a kindred, if unfazed spirit and friendship with his client considering his situation, not to mention some undeserved flak from the public eye for it.

Fast forward to 1960 when the Russians shoot down Francis Gary Powers’ (Stowell) U-2 spy plane over their airspace, much to the embarrassment of the CIA that was handling the covert operation and desperate to get the captured pilot back in the possibility that he might crack under pressure and spill more secrets than the aircraft did. Hiring Donavan again to secretly negotiate with them as he’s sent into Berlin to cut a swapping deal to get Powers for Abel that he’s drawn into the murky cloak-and-dagger and one-upmanship politics of East-West relations, just as the infamous Wall was being raised and gets even more complicated when a young, innocent American grad student Frederic Pryor (Will Rogers) becomes an unexpected pawn caught up in an already intense situation where nothing is left to chance.

Spielberg, once again in his historical cinematic mode, knows how to create the mood and pace for a film of this magnitude and even manages to adapt around the Cohen Brothers’ humour (who keenly co-wrote the script with Matt Charmin) for Bridge of Spies, never missing any details of the frosty, greyish settings of a wintry German capital being physically divided in the monochromatic blueish-greys and whites versus the bright hues of Manhattan from his longtime cinematographer Janusz Kaminski’s palette and Thomas Newman’s dramatic score.

For his fourth outing with the director, Hanks does fine being the humble, if shrewd negotiator who learns on his feet in the spy game he’s reluctantly brought into, whether he has to go face to face with his shifty East German counterpart (Sebastian Koch) who may or may not be who he says he represents to willing to go out on a limb for Pryor whereas the CIA would rather let him be a sacrificial lamb; all with a poker face mentality while being a suburban dad in calming his young son (Noah Schnapp) over worries about the A-bomb and some death threats to his family, trying hard not to get caught up in the anti-Soviet hatred.

Rylance almost steals the spotlight being the bizarrely unworried spymaster who spends his time painting than being a threat to national security to Hanks’ unintended straight-man role here, contrast to Stowell as a average all-American type not fitting to any school of thought of being a spy either (as well as Rogers’ Pryor, providing a untold story to that event), despite getting little screen time here along with Alda and Amy Ryan as Donavan’s protesting housewife. And doesn’t it smack an ironic and amusing coincidence that playing Hanks’ teen daughter in this particular film is Eve Hewson, the youngest daughter of U2 (get it?) frontman Bono?

A sturdy balance of nostalgia, drama and geopolitical standpoints, Spielberg and Hanks provide all of that in the two-and-a-half hour Bridge of Spies in its own way to remind us in the now that even in the darkest moments in history, the steadfast belief of cooler heads will, assuredly, always prevail.